Rihanna speaks: 'Love is so blind' 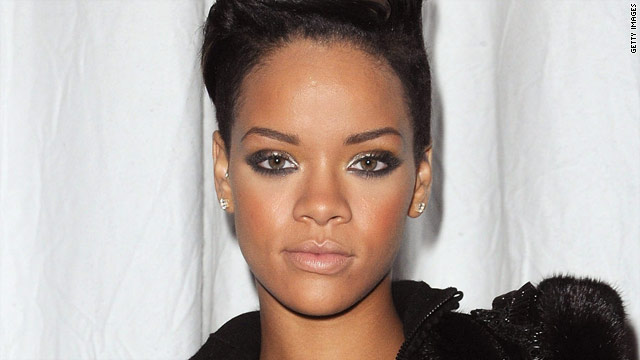 Rihanna says she wants to be a role model for girls, and fans helped her speak up about domestic violence.
STORY HIGHLIGHTS

(CNN) -- For women dealing with domestic violence, singer Rihanna has a bit of advice: "Forget about love."

"Come out of the situation and look at it for what it really is," she advised during an interview on "Good Morning America" on Thursday. "Love is so blind."

Yes, that wall of silence Rihanna built after being beaten in February by ex-boyfriend Chris Brown has finally crumbled.

Her refusal to speak about what happened the night before the Grammy Awards in February -- a leaked photo later revealed Rihanna had been shockingly battered -- was out of shame, she told Diane Sawyer on "Good Morning America."

"There are a lot of women who experienced what I did, but not in the public, so [that] made it really difficult," she said. "I just thought 'Oh my God,' here goes my little bit of privacy. Nobody wants anybody to know, and here I am, the whole world knowing."

"It was humiliating; that is not a photo you would show to anybody," the songstress said. "I felt completely taken advantage of. I felt like people were making it into a fun topic on the Internet, and it's my life. I was disappointed, especially when I found out the photo was [supposedly leaked by] two women."

Video: LKL: Chris Brown
I've put everything I've wanted to say for the past eight months into my music.
--Rihanna
RELATED TOPICS

Rihanna told "Good Morning America" that Brown was definitely her first love, but that the more in love they became, the more dangerous the relationship turned. It was a reality she was too embarrassed to admit.

"I didn't want people to think that I fell in love with that person," she said. "That's embarrassing that that's the type of person I fell so far in love with, so unconditionally, that I went back."

People put her on a pedestal "with all these expectations," she said, "but I'm a human being, and I'm not perfect." Now, she can admit it was a mistake to give the relationship a second chance.

Nearly 10 months have passed since her secret came tumbling out for the world to see, and Rihanna said it was her fans who helped her finally speak up about domestic violence.

"It's pretty natural for that to be the first reaction; to [want] to go back," she told Sawyer in the interview. "The minute the physical wounds go away, you want to go back. [But] when I realized that my selfish decision for love could result [in] some young girl getting killed, I could not be easy with that part," she said with tears in her eyes.

"These are young girls, and I didn't realize how much an impact I had on these girls' lives until that happened," the singer admitted. "It takes a woman eight or nine times before she leaves, and ... that's not what I want to teach people. It was a wake-up call, big time."

The details of her decision will be the topic of a follow-up interview on "20/20" Friday. Brown was sentenced to five years of probation and six months of community service in August for the assault.

In an appearance on "Larry King Live" in September, Brown said he still loved and was in love with his former girlfriend. But, he said, "nobody taught us how to love one another. Nobody taught us a book on how to control our emotions or our anger."

He added, "I'm not trying to fall on the fact that I'm young -- I'm just saying it's a lot of stuff that I wish I could have changed that night."

While Brown said in the Larry King interview that he couldn't believe it all happened, Rihanna has no doubts.

The assault has noticeably changed Rihanna, who embraces a tougher, edgier stance on her next album, "Rated R," due out November 23. iReporter: "Rihanna is Superwoman"

"I have grown up a lot since my last album. It [represents] exactly where I am at right now," she told Glamour magazine for an upcoming issue. "I've put everything I've wanted to say for the past eight months into my music. [My new album] is super fearless, which is exactly how I feel right now. I am in a really good place."

It's a place she reached with the help of her support system: her family. Her mother, she said, gave her and her younger brother "the tools to survive" as they grew up in an average home in a humble neighborhood in Barbados.

"I would never have dreamed that my career would be this successful," she said. "But [my mom] made us feel anything was possible and instilled in me such confidence."

That kind of confidence has helped the singer come forward about a very personal issue.

"The positive thing that has come out of my situation is that people can learn from that," she told Glamour. "I want to give as much insight as I can to young women, because I feel like I represent a voice that really isn't heard."