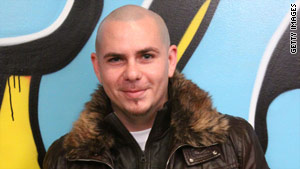 Los Angeles, California (CNN) -- As the man in the Dodgers jersey walked quickly around the perimeter of the infield, fans poured down from the bleachers begging for autographs.

In five years, he's gone from a mouthy Miami street hustler to a chart-topping hip-hop star whose infectious Caribbean beats have enticed crossover audiences to swing their hips and sing along -- even taking on some of the words in Spanish. His fourth studio album, "Rebelution," debuted in the Top 10 on the mainstream Billboard chart.

But Pitbull's growing profile means nada as he takes the mound to throw out the ceremonial first pitch of the game. "I'm the only Cuban who never picked up a baseball in his life," he said, preparing. He awkwardly winds up and releases the pitch. It falls short, bouncing on the ground before reaching the plate.

"One more try!" he signals. The second attempt is closer to the mark. It's symbolic of Pit's career. "It's not how you start. It's how you finish it," he likes to say.

Tommy Lasorda, the legendary Dodgers manager, is waiting to bust his chops as he leaves the infield. Later, we get the scoop on the conversation. (By the way, the Dodgers won that game.)

CNN: Tommy Lasorda was out there giving you a little bit of grief.

Pitbull: Tommy Lasorda told me, "It was the worst throw I've ever seen in my life!" I said, "Well, I'll throw you in the studio. You rap, I'll play baseball." He goes, "I'll rap a whole lot better than that throw!" (Laughs)

CNN: How much do you deflect things with humor?

Pitbull: [Humor is] everything. Everything. Usually the negatives turned out to be the most positive for me. In the music industry, any other artist would have looked at the situation I was in and thought, "Oh man, this is not for me." I looked at it more like [Darwin exploring] the Galápagos Islands. You know -- survival of the fittest.

CNN: Were you a troublemaker growing up?

Pitbull: Not a troublemaker. I'm sharp. Slick, if you want to call it. What the street taught me how to do is how to hustle. How to make something out of nothing.

CNN: In the music industry, street cred may help an artist.

Pitbull: Anybody who's made it out of the street -- they want to do this (places index finger over his lips). Shh.

Pitbull: You can't get a Diddy or Jay-Z to speak to the Latins. It's not gonna happen. There's a force field where they said, "OK, we're going to let you here -- but that's it." Diddy got the closest. Why? Because he had J. Lo. The only reason my grandmother knows Puff Daddy is because of J. Lo. But he couldn't cross that barrier. So as far as myself -- I guess I'm their role model.

CNN: How much do you want to cross over?

Pitbull: I have respect for Jay-Z and Diddy for what they did in the hip-hop game. But I want to be Celia Cruz. I want to be Gloria Estefan [both were born in Cuba]. I want to enterprise -- open clubs and restaurants. They've done it also -- but those are who I look up to.

CNN: Your parents were both born in Cuba?

CNN: How did they come to Miami?

Pitbull: My grandmother fought in the [Cuban] revolutionary war actually with Castro, because everybody thought that Batista was corrupt. I'm not saying that he wasn't, but it's almost like the lesser of two evils. [When she became disillusioned with the Castro government], my mother and my aunt got sent off in an operation called Peter Pan without their parents. She didn't see her mother for seven years. As far as my father -- he came over also. He didn't come in the Peter Pan, but they fled the country.

CNN: Would you ever go to Cuba and play a concert there?

Pitbull: No way. I'd never go to Cuba and play a concert. [I'd consider playing there] as soon as I know that it's confirmed that Castro's out of there. I mean, if you ask me, I think Castro's been dead for years. He handed power to Raúl, and he slips pictures here and there. He keeps giving these pictures to the media with the same shirt on -- same jacket, same everything.

CNN: How do you feel about other artists of your generation who feel compelled to go and perform in Cuba as kind of an olive branch?

Pitbull: Juanes just did it. Papa, you can't change Cuba. History will tell you that you can't change Cuba. I respect him as an artist -- he's like U2, the Bono of Spanish. I don't respect his decision. Maybe he doesn't really understand it at the end of the day because he's not Cuban. [Juanes is Colombian.] But to each his own. There's too much suffering, too much pain from people who left that island, that have come over here and tried to change their life. advertisement

CNN: Even though you were born in America, how much are you influenced by your Cuban roots?

Pitbull: My mother, she's like, "Look, you're American, son. You were born here in the States." My father? My father said, "You're Cuban-American." My mother would call me Chris, because my middle name's Christian. My father would say, "No, your name's Armando." But in my blood, what it tells me is, "You're Cuban-American." The music is what makes you, the food is what makes you, the way you've been taught mentally.