RZA: Wu-Tang a drive-by away from never existing 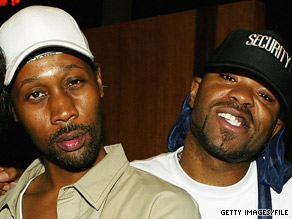 If RZA, left, had been jailed or Method Man killed, Wu-Tang may have never formed, RZA says.

Method Man, the group's most recognizable voice, was nearly killed before the band formed, Wu-Tang's chief producer, RZA, writes in his forthcoming memoir.

Meth was walking to buy marijuana at 160 Park Hill Avenue in Staten Island -- the house in Wu-Tang's "Protect Ya Neck" video -- when RZA saw him across the street, he writes in the book.

"Come over here, yo!" RZA beckoned, according to "The Tao of Wu" (Riverhead). "He stopped and came running over. A few seconds later -- pow-pow-pow-pow-pow! -- a guy started shooting up the front of 160. A buddy of ours, Poppy, an innocent, school-going, nice guy -- he was shot and killed right there."

Interactive: Where's the Wu been? »

It wasn't the only close call RZA said could have snuffed the band that rewrote the rule book for hip-hop acts. The year before the group formed in 1993, RZA was acquitted on an attempted murder charge that could have put him behind bars for eight years, he writes in "The Tao of Wu," out Thursday.

Expanding on the book's anecdotes in an interview with CNN, RZA explained that if he had been imprisoned or if Method Man, aka Clifford Smith, had been killed, the band never would have come to fruition.

RZA, whose real name is Robert Diggs and whose stage name is pronounced "Rizza," also talked about his role in the death of his cousin, Russell Jones, better known as Ol' Dirty Bastard or ODB. Two days before his 36th birthday in 2004, ODB died in a New York recording studio from an overdose of cocaine and painkillers.

RZA writes in the book that he once witnessed ODB force his own son to watch him do drugs. RZA tried to leave, he writes, but ODB wouldn't let him. Now, RZA told CNN, he wishes he would've been tougher with ODB about his drug problem.

The History of Wu

RZA formed the Wu-Tang Clan in 1993 with his cousins and friends from Staten Island, New York.

The band commanded the hip-hop scene in the 1990s and racked up millions of album sales. It even started a clothing line called Wu Wear.

Today, Wu-Tang and its members can still be found on the marquees of hip-hop venues. They also make appearances on the silver screen: RZA appeared in "Funny People" and "American Gangster," while Method Man has appeared in numerous movie roles and on HBO's "The Wire."

Following are excerpts from the interview, which has been edited for language, flow and length:

CNN: Could your imprisonment or Method Man's death have derailed Wu-Tang's formation?

RZA: Either one of those incidents could definitely have derailed it. Of course, myself being the abbot, the one who came with the idea, if I wouldn't have made it out of that tumultuous time -- it seemed like I wasn't going to make it out of it; there was a lot of odds against me -- but we stood strong, and self-defense made sense to the jury. We beat that ...

It was the victory over that incident that made me change my whole direction. In a way, it's double-edged in that incident. One, if I would've lost that, yeah, Wu-Tang wouldn't have happened, but also it's the victory of it that inspired me and gave me the drive also to go and really get serious about Wu-Tang and the things I was dealing with.

Same thing with Meth, he always brings it up ... that that day saved his life. He actually said, if it was anybody else calling him, he wouldn't have came.

CNN: In the book, you cite lessons from Eastern religions, Christianity, Islam, [Nation of Islam offshoot] Five Percent, numerology, comic books, kung fu, chess. What would you say to someone who says it's difficult to reconcile these dogmas?

RZA: Like it says in the Bible, "In the beginning was the word, and the word became flesh" -- if we go to the root of the word, we will find that, yeah, everything is similar. Everything is teaching us all the same path.

It's just that one religion was good for these people because of their living conditions. In the Quran, they mention paradise being filled with wells, wells of water, and if you're in the desert and you've got a chance to get water and gardens -- as they describe paradise in the holy Quran -- if you're going to get gardens, that's the paradise that fits your situation. ... Everything they're saying relates to the people they're talking to. ...

You remove the messenger and take the message.

CNN: You say in the book that your penchant for violent lyrics in your younger years "was a product of my history and environment" and that it no longer represents you. But you also say you won't repudiate violence. Why not?

Then in [the Hindu scripture] Bhagavad Gita, it says Arjuna was talking, Arjuna didn't want to commit violent acts against an army that was attacking him. He couldn't find it in his heart to do it. It was people he loved. He didn't want to get into violence, but Krishna had to point out to him, "Your duty is your duty." ...

So, to me, violence in the light of justice is still violent, but I don't see it the same. It's because of justice that I don't repudiate violence because justice must be served somehow.

CNN: ODB was a product of his environment as well. To what degree were you and other Wu-Tang members responsible for his death?

RZA: The guys would say it's more me than them because they say that's my cousin and I was right there. If you let a man that you love or anybody -- man, woman or child that you love -- sit there and destroy themselves in front of you, you're neglecting them ...

Everybody let him do what he wanted to do. ... There were times when I took his drugs and threw them down the toilet. When I do that, he would get so pissed off I don't see him for weeks after that. ...

CNN: You say you ran Wu-Tang like a dictatorship in its first five years. I know you and Raekwon have had creative differences and Ghostface Killah is suing you over royalties. Ever regret the dictatorship approach?

To me, in the beginning, the dictatorship led us to such a strong foundation that even though Wu-Tang seemed to be crumbling, it didn't fall because of the root foundation of one man's idea. But now as it's coming back together -- we're living in the twilight age of it right now -- it's still surviving because of the democracy of it.

CNN: Wu-Tang is still around, but nothing like the heyday of the 1990s. Will we ever see a renaissance?

The same thing with Wu-Tang. You'll see the difference in hip-hop from the moment we came in to before we came in. We changed it. We changed the whole structure.

CNN: Have you accomplished everything you've set out to accomplish?

RZA: I'm me and the me that's me is me and is going to continue to be me, and it's always reaching and growing. I'm grateful for what I've accomplished. I'm grateful for anyone who thinks I accomplished something and says, "Well he did this; he did that." I'm proud to be accepted, but I feel like I've just scratched the surface for some weird reason.

All About Wu-Tang Clan • Hip-Hop and Rap • Staten Island