For Kings of Leon, drinking, brawling all part of the fun

WEST HOLLYWOOD, California (CNN) -- We halfway expect the four members of Kings of Leon to roll into Bar 1200 drunk and brawling, a burly tour manager leading them in by the scruff of their necks. 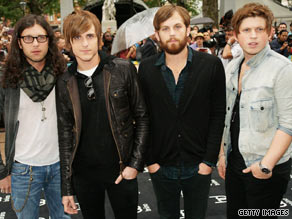 Kings of Leon is a family affair, consisting of three brothers and their cousin.

Instead, a uniformed valet ushers them in, one by one, offering each a flute of champagne -- which Caleb Followill, the singer, and Nathan Followill, the drummer, politely accept.

"We have a bunch of rooms at the hotel, and the valet came with the floor," they explain, shaking their heads in amazement.

The hipster lounge we've gathered in is in the lobby of the Sunset Marquis in West Hollywood, California. A framed black-and-white photo of the Kings hangs in a spot of honor: closest to the bar. It's autographed, with a inscription that reads, "Scene of the crime!"

Kings of Leon's fourth album, "Only by the Night," has sold 5 million copies worldwide and spun off three hit singles, catapulting the group into that elite fraternity of bona fide rock bands that enjoy airplay on both pop and rock stations.

These days, the Followill four -- brothers Caleb, Nathan and Jared, along with their cousin, Matthew -- are fulfilling the promise that so many critics predicted early in their career.

Their majestic, tension-filled brand of Southern garage rock has its roots in, of all things, the church. The brothers' dad, Ivan, was a traveling Pentecostal preacher who led raucous, revivalist-style congregations. Both he and his father went by the name Leon.

His boys have carried on in his road warrior tradition. The stage is their pulpit, their congregation, 20,000-seat arenas.

The following is an edited version of our interview.

CNN: It's been a great couple of years for you. Do you feel your lives have changed?

Caleb Followill: Absolutely. It's just a strange thing for us, because we've had success in the past, but a great majority of it hasn't been in America. And when it starts to happen in America, you turn into a wild person again. "Oh, let's party!"

CNN: Is it really true that you guys can consume more alcohol than any other band out there on the road?

Jared Followill: Collectively, it's a possibility.

Caleb: I mean, we can consume more alcohol than any other popular band that actually works. As soon as we say "thank you" and "good night," that means it's time for us to have fun. We're sober in the mornings. Most mornings.

CNN: Are you sober now?

CNN: You guys are also famous for your fights. Rolling Stone had two of you at each other's throats. A $7,000 mirror was apparently involved --

Caleb: And we were so mad about what they said that we got into a big fight. Nah, I'm kidding. A lot of the stories that come out about us fighting absolutely aren't true.

Caleb: We're about to Menudo his ass and get someone younger.

CNN: You grew up with religion at the center of your life. How do you think it's worked its way into what you do now and what we hear coming out of the stereo?

Caleb: I grew up with my dad as a preacher, and so you hear Bible verses. I've always looked at the Bible as poetry, so I kind of learned to write in that style from time to time. And a lot of people misconstrued that as me trying to push something on someone. We're all sinners.

(Looks at Nathan) Look at him drinking the devil's grape juice. (The others chuckle)

CNN: You played music when you were growing up, but it was associated with the church.

Nathan: It was more like black gospel music, like Aretha Franklin, Al Green -- fun music to play. Most people hear, "Oh, you played in church," and they picture an organ, and just very quiet. It was very lively and wild.

Caleb: The thing that inspired me about the music we grew on is that it was human music. The people that got up to play, they basically just got up there and told the story of what happened to them that day.

Nathan: It was like the blues. With a little Jesus.

Caleb: (demonstrates by imitating a blues singer) "Today, I went to Walmart. Da da da da. I saw someone walking down the aisle, da da da da." For me, it was inspiring. I thought, "Man, I want to make up some songs."

CNN: On your current album, "Only by the Night," your music has gotten bigger and more anthemic. Can we attribute that to the time you've spent hanging out with U2?

Caleb: We spent a big chunk as the opening band for U2 and Bob Dylan and Pearl Jam -- and when we walked out into these venues, let's face it, there might have been 200 people in a 20,000-seat venue. And so we would start playing our songs, and when we'd play it, it would sound bigger than anything we'd ever heard, because it was bouncing off the walls. So then we'd start to soundcheck in all these big places, and the songs started to build.

But you never know. The next one could be raw and dirty and gritty and really small. We like to keep people guessing.

CNN: How did your parents react to your saying, "Hey, Mom and Dad, I want to be in a rock band."

Caleb: They took it pretty well. They supported us pretty good. We had to lie our way through it a little bit. Matthew's family didn't know he was actually going to be in the band. We told them he was going to spend the summer with us but --

CNN: Right now, your dad is on the road with you, Matthew.

Matthew: Yeah, he's only out for a couple of shows. Our family always comes to hang out.

CNN: Looks like you'd better get him some sunscreen. He's a little red.

Caleb: That's not from sun. That's actually from alcohol. He gets really red in the face after a long bender.

All About Kings of Leon