How Jay-Z mended fences with his father 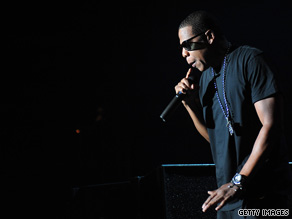 Jay-Z tells Oprah Winfrey a conversation with his father freed him "one hundred percent."

Now Jay-Z charts his escape from the hard-knock life, describes the reunion that healed the wounds of his childhood -- and even reveals his personal creed.

The rapper, now 39, was born Shawn Carter in Brooklyn, New York. His albums include "Reasonable Doubt," "The Black Album" and the just-released "The Blueprint 3." Jay-Z also owns a portion of the NBA's New Jersey Nets and founded, with Damon Dash, the clothing line Rocawear.

Jay-Z spoke with Oprah Winfrey about his father, his anger and his old life. The following is an edited version of the interview.

Oprah Winfrey: When you were 5, your family moved to the Marcy projects -- and then your father left when you were 11. When you look back at that, what did your 11-year-old self feel?

Jay-Z: Anger. At the whole situation. Because when you're growing up, your dad is your superhero. Once you've let yourself fall that in love with someone, once you put him on such a high pedestal and he lets you down, you never want to experience that pain again.

So I remember just being really quiet and really cold. Never wanting to let myself get close to someone like that again. I carried that feeling throughout my life, until my father and I met up before he died.

Oprah: Wow. I've never heard a man phrase it that way. You know, I've done many shows about divorce, and the real crime is when the kids aren't told. They just wake up one day and their dad is gone. Did that happen to you?

Jay-Z: We were told our parents would separate, but the reasons weren't explained. My mom prepared us more than he did. I don't think he was ready for that level of discussion and emotion. He was a guy who was pretty detached from his feelings.

Oprah: Did you wonder why he left?

Jay-Z: I summed it up that they weren't getting along. There was a lot of arguing.

Oprah: And did you know you were angry?

Jay-Z: Yeah. I also felt protective of my mom. I remember telling her, "Don't worry, when I get big, I'm going to take care of this." I felt like I had to step up. I was 11 years old, right? But I felt I had to make the situation better.

Oprah: How did that change you?

Jay-Z: It made me not express my feelings as much. I was already a shy kid, and it made me a little reclusive. But it also made me independent. And stronger. It was a weird juxtaposition.

Oprah: I've read that when you were 12, you shot your brother in the shoulder. Did your father's leaving have anything to do with that? Did it turn you into the kind of angry kid who would end up shooting his brother?

Jay-Z: Yes -- and my brother was dealing with a lot of demons.

Oprah: How old was he?

Jay-Z: About 16. He was doing a lot of drugs. He was taking stuff from our family. I was the youngest, but I felt like I needed to protect everybody.

Oprah: So how did you get back in touch with your father?

Jay-Z: My mom set up a meeting. And now I realize why -- it makes all the sense in the world. I remember very distinctly that I had a conversation with her in my kitchen. I was saying, "You know, Ma, I've really been trying to look inward, and maybe I'm just not meant to fall in love like other people do." She just looked at me like, "Hush up, boy."

Jay-Z: And I guess from that point, she figured out what was wrong with me, and she planned a meeting between me and my father. I was like, "Ma, I'm a grown man. I don't need a dad now."

Oprah: You didn't feel a hole in your soul?

Jay-Z: I never looked at that. I guess I didn't want to deal with it. Because, you know, once I looked, I'd have to do something about it. And I guess I still had too much resentment and anger.

Oprah: In one of your songs, you wrote that you weren't sure if your father even remembered your birthday is in December.

Jay-Z: I believed that. When I was a kid, I once waited for him on a bench. He never showed up. Even as an adult, that affected me. So when my mom set up this meeting, I told her he wouldn't come -- and the first time, he didn't. At that point, I was really done, but Mom pushed for another meeting, because she's just a beautiful soul.

Oprah: The second time, your father showed up.

Jay-Z: He showed up. And I gave him the real conversation. I told him how I felt the day he left. He was saying stuff like "Man, you knew where I was." I'm like, "I was a kid! Do you realize how wrong you were? It was your responsibility to see me." He finally accepted that.

Oprah: Where had he been?

Jay-Z: At his mom's house 10 minutes away from me. That was the sad part.

Oprah: Was there any explanation he could have offered that would have satisfied you?

Jay-Z: Yes -- and that's why we were able to mend our relationship.

Oprah: What was his reason?

Jay-Z: When I was 9, my dad's brother got stabbed, and my dad went looking for the guy who did it. People would call in the middle of the night and tell him, "So-and-so is out here." So my dad would get up, get his gun, and go outside to look for the guy. After a while, my mom was like, "Hey, this is your family now. You can't do that." But this was my dad's baby brother. And my dad was in so much pain that he started using drugs and became a different person. So I understand that the trauma of the event, coupled with the drugs, caused him to lose his soul.

Oprah: When you saw him again, had he come back to himself?

Jay-Z: He was broken. He had a bad liver, and he knew that if he continued drinking, it would kill him. But he didn't stop.

Oprah: How soon after you saw him did he die?

Jay-Z: A couple of months. I got him an apartment, I was buying furniture. And he passed away.

Oprah: Did you instantly make peace with him during that conversation?

Jay-Z: Pretty much. I felt lighter.

Oprah: The conversation freed you in ways that you hadn't been free before?

Oprah: Did it open the door for you to have a life with love in it?

Oprah: So what's your personal creed?

Jay-Z: Be true to yourself -- and keep things simple. People complicate things.

Oprah: My creed is that intention creates reality.

OPRAH.com: The top 20 things Oprah knows for sure

Oprah: What's the basis of your spiritual belief?

Jay-Z: I believe in karma: What you do to others comes back to you.

Oprah: But don't you think we're responsible only for what we know? Otherwise, you'd be facing karma for every person you sold drugs to.

Jay-Z: As a kid, I didn't know any better. But now, if I were to act as if what I did wasn't bad, that would be irresponsible. And I'd have to bear the weight of that.

Oprah: Maya Angelou always says, "When you know better, you do better." Do you still think back on that time in your life?

Jay-Z: All the time. When you make music, you're constantly on the psychiatrist's couch, so to speak. That's an outlet for me. Because I'm not normally a talkative person. I don't have conversations like this for no reason.

All About Jay-Z • Oprah Winfrey • Music