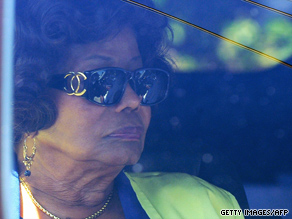 Michael Jackson's estate provides $86,000 a month for Katherine Jackson and her grandchildren.

The money given them by the Michael Jackson estate is in addition to the maintenance of the home -- which is owned by the estate -- in Encino, California, where Katherine Jackson lives with her grandchildren, the papers said.

The Los Angeles County judge overseeing the probate of Jackson's will ordered that the petitions for their monthly allowance be made public -- although with some details removed. Those papers were released Thursday.

Katherine Jackson was granted custody of her son's three children soon after Jackson's June 25 death. She and the children were named beneficiaries, along with unnamed charities, in Jackson's 2002 will.

Control of the estate's assets, however, was given to lawyer John Branca and John McClain, a former music industry executive. Jackson named them as trustees in his will.

The petitions filed by Branca and McClain in July, and later approved by Judge Mitchell Beckloff, outlined $26,804 in monthly expenses for Katherine Jackson.

The largest amount from that, $4,722, pays for an assistant for her. Another $3,500 each month is budgeted for clothing for Katherine Jackson, who is 79 years old. She's also given $2,000 each for a housekeeper and driver. She has a $1,500 entertainment allowance each month, the documents said.

The details of the children's budget are mostly blacked out at their lawyer's request. Margaret Lodise told the judge there was concern someone could use the financial information to pose as one of the children online. She told CNN the family was aware of people posing as Jackson children with Twitter accounts.

The documents did reveal the three children get a combined $60,000 a month from their father's estate. They pay $14,600 a month for salaries and payroll taxes for people who take care of them, according to the petition.

Michael Jackson's children get $13,260 each month for entertainment and related expenses, the papers said.

The petition estimated Michael Jackson's estate is worth at least $500 million and is growing.

Major deals have been reached in the past month that are expected to add tens of millions of dollars to the estate, including a movie and music deal with Sony.