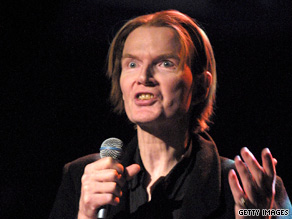 A respected poet and musician, Carroll also was the author of "The Basketball Diaries," which was adapted into a 1995 movie starring Leonardo DiCaprio.

Carroll died Friday at his home in Manhattan after suffering a heart attack, said his former wife, Rosemary Carroll.

In 1980, he released the popular album "Catholic Boy," which, according to his fan Web site, expressed the "[b]omb-fear anticipation, the optimistic nihilism and glittering darkness of the 1980s."

The track "People Who Died" was one of the most-requested songs on FM radio at the time, and as Newsweek's Barbara Graustark noted then, "it propelled [Carroll] from underground status to national attention as a contender for the title of rock's new poet laureate."

The release of the song coincided with the death of John Lennon. The success of the album was attributed to the powerful combination of pure rock 'n' roll with Carroll's poetic sensibility and ability to write from his own experience.

The fan Web site Catholicboy.com sums up Carroll's approach to music by quoting him as saying, "There ain't much time left, you're born out of this insane abyss and you're going to fall back into it, so while you're alive you might as well show your bare ass."

In addition to two follow-up albums, Carroll was a best-selling author of six books.

"He was a sweet, sweet man, and I'm going to really miss him," said Cassie Carter, a close friend for more than 20 years who operates Catholicboy.com.

Carroll was born in New York in 1949 and spent his childhood living on the city's Lower East Side, attending Catholic schools, said Rosemary Carroll, whom he met in 1973.

At 12, he began keeping a journal that eventually was published as "The Basketball Diaries" in 1978. In it, he recorded the highs and lows of his youth.

He first experimented with drugs at 12 and soon was addicted to heroin, but he was able to kick that habit in the 1970s, his former wife said.

He had just completed a novel, tentatively titled "The Petting Zoo," which is about a young painter who experiences spiritual crises. The date of its release has not been set.

Carroll is survived by a brother, according to his ex-wife.

All About Jim Carroll • John Lennon