(CNN) -- Richard Thompson has had three boxed sets devoted to his music. He's been the subject of a tribute album. He's constantly ranked among rock 'n' roll's greatest guitarists and finest songwriters by both the music press and fellow musicians. 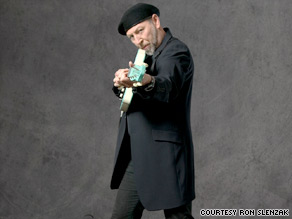 Richard Thompson says the focus of his career is his live work. Top 40 hits are "kind of meaningless," he said.

What does a legend have to do to get noticed by the mainstream?

Thompson, 60, brushes aside such hopes of breakout success. His focus is on live performance, he says in a phone interview.

"I think the focus of what I do is really live work," he said. "And I think if you persist in that, then slowly but surely, through word of mouth, the word gets out. And I continue to grow as a live performer."

Still, for those who want a Thompson primer before seeing him live -- he'll be touring with Loudon Wainwright in the fall -- there's that third boxed set, "Walking on a Wire: 1968-2009" (Shout! Factory), which came out recently. The four-disc set compiles some of his best work with his old band Fairport Convention, his ex-wife Linda, and as a solo artist.

The amiable Thompson took some time to talk about putting together the new box, remaining outside the fray and what he thinks of "Rock Band." The following is an edited version of the interview.

CNN: Were you surprised another boxed set was in the offing?

Richard Thompson: This is more of an overview and perhaps a first-time buyers' introduction kind of thing. It's a greatest hits. If there were any hits. (chuckles)

CNN: Does that bother you? You've never had, especially in the States, that kind of mainstream, Top 40 success.

Thompson: You know, I think that's kind of meaningless. Certainly in the area in which I exist, I don't think you need hits, necessarily -- though having said that, it would have been useful.

I think the focus of what I do is really live work. And I think if you persist in that, then slowly but surely, through word of mouth, the word gets out. And I continue to grow as a live performer. More and more people come to shows, which is gratifying.

I think the albums serve as a signpost, a reference point, but it's not really the focus.

CNN: You've played professionally for more than 40 years. What were your goals when you started with Fairport?

Thompson: Probably to survive. ... We turned pro when I was 18. At that age, you don't really think beyond about three months. So we were delighted and thrilled to be kind of earning a living from what we were doing. I think in the back of our minds, we thought, we'll do this for a year or two years, and then it's back to school, back to college and get a real job.

And then it lasted for five years, [though] I still thought I'd be going back to school at some point. And then 10 years, 15 -- I'm still looking over my shoulder occasionally in disbelief that I managed to get away with it this long. It actually turned into a career.

CNN: There are these themes -- tightropes, carnivals, the "Wall of Death" -- that run through your songs. Do you feel like you're on a tightrope?

Thompson: I think if you're going to be an artist, you're really supposed to be on the edge of society. Your positions should, by definition, be precarious. It's only when you're out on the rim that you have the best view, that you have the perspective to see what society is. So I suppose I'm kind of referring to that sort of thing.

CNN: It's a cliched question, but who or what influenced your music?

Thompson: I grew up listening to Scottish music, traditional music, my father's jazz records and my sister's rock 'n' roll records. And in my father's record collection, there were things like French records he brought back from World War II. ...

The more you know about musical history, the richer your possibilities are. And I think the more you look outside your own field of music, the more you're going to discover.

CNN: A few years ago, Playboy asked a number of people to put together a list of the "best songs of the past 1,000 years," and you took them seriously, going back to the 11th century. Were you surprised when they rejected the list?

Thompson: I think they thought I was taking the piss, as we say in England. That I was irreverent. And perhaps I was.

CNN: When anthologies of your work are put together, do you listen and say, "That's pretty good" or "I'd like to do that again"?

Thompson: Usually the latter. I don't really like listening to my own recordings that much. One of the reasons is, I perform the songs live, and every night things get slightly differently interpreted. And the version you perform tends to grow away form the recorded version with the passage of time ... in your desire to keep your music fresh. So it's sometimes horrifying [to listen] -- why did I do it so slowly? Or, that's a really lame version.

CNN: The game Rock Band is very popular now, with a Beatles edition coming out. Have you tried to play Rock Band?

Thompson: (laughs) I haven't tried it, no. I haven't had a chance. I think it might be fun. But I hope some of the people who play these games are actually thinking, "I've scored so many points in this game, perhaps I should try a real instrument at some point." So I hope it encourages people to take an interest in music, as opposed to just kind of messing around. ... It's an extraordinary phenomenon. I'd love to have a go.

CNN: If you hadn't managed to fool people over the years, what would you have done?

Thompson: I really don't know. I think I would have been some kind of dropout. I was such a rebel. ... I'd probably be one of those people who follows festivals around making hand-tooled leather belts or something, living in a caravan. ...

Or a landscape gardener or something. I could probably do that.