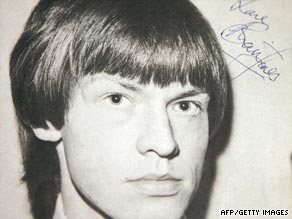 Police in Sussex, in southern England, have confirmed they are examining documents given to them by an investigative journalist who has been researching events surrounding Jones' death.

Scott Jones, who is not related to the musician, has spent four years reviewing the evidence and speaking to key witnesses in the case.

In an article published in the Daily Mail in November 2008, Jones wrote, "I'm convinced Brian Jones' death was not fully investigated. The only question that remains is why?"

Brian Jones' body was found in the swimming pool after a party at his home in Cotchford Farm, East Sussex in July 1969. He was 27.

An inquest returned a verdict of death by misadventure, despite post mortem results showing he had not taken illegal drugs and had only consumed the alcoholic equivalent of three and a half pints of beer.

One of the most popular conspiracy theories that followed was that Jones was murdered by his builder, Frank Thorogood.

The theory gained credence after Thorogood allegedly confessed to the killing before his death in 1993. The storyline formed the basis of the 2005 film "Stoned."

Sussex police told CNN they could not say how long it would take to review the new material, nor whether it could lead to a full investigation.

There have been repeated calls for closer examination of the case since Jones' death, which came just three weeks after he left the Rolling Stones.

His drinking and drug-taking had taken a toll on his health and the band, and in 1969 Jones announced he was leaving.

In a statement he said, "I no longer see eye-to-eye with the others over the discs we are cutting."

Last year, Scott Jones published an article containing contents of an interview he conducted with one of the people present at Jones' home on the night of his death.

In the article, published in the Daily Mail, Jones' said Janet Lawson, the girlfriend of Rolling Stones tour manager Tom Keylock, gave him a version of events that contradicted her official police statement.

She is reported to have called her original statement, "a pack of lies... total rubbish."

Lawson's revised version of events is among the documents Jones has supplied to Sussex police. It is also believed to include previously unseen files released by the Public Records Office.