NEW YORK (CNN) -- Madeleine Peyroux has carved out a successful career as an interpreter of songs from greats such as Billie Holiday, Patsy Cline and Leonard Cohen. But on her fourth album, the smoky-voiced singer holds the mirror up to herself. 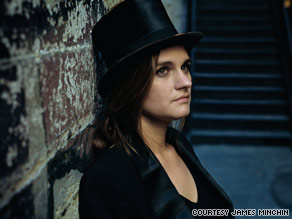 Madeleine Peyroux takes a clear-eyed look at her life and relationships on "Bare Bones."

"Bare Bones" is Peyroux's first album for which she wrote or co-wrote all the tracks. And she doesn't shy away from touchy subjects.

"River of Tears" was inspired by her difficult relationship with her late alcoholic father.

"I think it's the kind of feeling that you can get any time of your life when you just have to face some things," she says about getting personal. "You have to let it all hang out, let go of the ideas that were more comfortable and embrace some of the sadness in your life. And then perhaps let it float."

Born in Athens, Georgia, Peyroux (pronounced "Peru") spent some time in a domestic violence shelter as a child. After her parents' divorce, she moved to Paris with her mother which is where, as a teenager, she tested her mettle as a performer by busking on the streets.

While Peyroux prefers to keep a fairly low profile, she took the time to talk to CNN about stripping down to the bare bones on her newest album.

CNN: This is the first album where you've written or co-written all the material. What was that like?

Madeleine Peyroux: I was just excited about it. Every day was another opportunity to keep writing for this record, so I spent a year and a half co-writing with a lot of other people as well so that I could go through different processes and get the songs written. Now I'm singing these songs and I feel that looking back ... it was time really well spent.

CNN: Was there apprehension about revealing too much about yourself?

Peyroux: No. I think of the things that I wrote on this record as stories of being a young woman walking the streets of Paris late at night in "Our Lady of Pigalle," or trying to touch on the Southern culture of drinking and surviving on the basic sayings that we have in order to understand what life is all about. ... But the question was ... would anybody want me to actually tell the full story from beginning to end and make sense of it? Because in the end, I'd like these songs to make sense to everyone and not just be my story.

CNN: Tell us about the song "River of Tears."

Peyroux: My producer, Larry Klein, had the idea. He wrote the lyrics at the beginning of the song because he had been working with me during the time my father passed away and he knew the story. ... He wrote, "Stop all this talk, turn off the telephone. Open up another bottle. I'm gonna float down this river of tears." We kept writing it together.

CNN: What was your relationship like with your dad?

Peyroux: Complex. ... He was a complex character. He's definitely a big part of the material on this record.

CNN: The album ends on a very uplifting note with the song "Something Grand" and the line "all's forgiven." Is it true that song was inspired by President Obama?

Peyroux: It was. ... I live in Brooklyn, New York, and I was up at 4 a.m., the quietest hour, where the highway just slows down for about five minutes so you don't hear any trucks banging over the potholes. I had the windows open. The debates [had been] on television. It was an exciting feeling, and we knew that there was a change coming. And I needed to know that in my bones, and I wanted to feel it. Luck would have it that Obama was elected the day that I recorded the vocals on that song.

CNN: What is it about early female blues singers that captivate you?

Peyroux: I think I was probably an early teenager when I discovered Bessie Smith, Ma Rainey and a bunch of people that are on a long list of artists. They were important to me, especially as an early adolescent. ... To have a female role model that first of all touches me personally and deeply. ...

They were very strong women. Bessie Smith, for example, created her own life. She ran the show, she owned a railway train.

CNN: You've had a tough life so far, haven't you?

Peyroux: Tumultuous. I think eventful ... with traveling and going through a lot of changes in my household, my family, moving around quite a bit. But [I've had] a lot of luck, you know. So not as tough as just a little crazy. ...

Music was a big part of [my luck]. And it has the power to change a lot of people from being jaded and take them back into something soothing and healing.