LOS ANGELES, California (CNN) -- No deal has been reached between Michael Jackson's mother and his ex-wife over the custody of the late singer's children, according to a lawyer in the case. 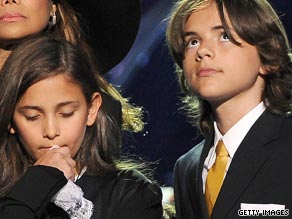 Debbie Rowe is the biological mother of Paris (left) and Prince Michael Jackson.

Eric George, who represents Debbie Rowe, the biological mother of Jackson's two oldest children, demanded Tuesday that the New York Post retract its report that Rowe had agreed to take $4 million not to challenge Katherine Jackson for custody.

In a letter sent Tuesday afternoon to the newspaper's editor, George said the report "can only have been concocted with reckless disregard for the truth."

"There has been no agreement reached between Ms. Rowe and the Jacksons," George said.

While George said Rowe still has not decided if she will ask the court for custody or visitation, he said she will not try to get money from the Jackson family.

"Ms. Rowe has not accepted -- and will not accept -- any additional financial consideration beyond the spousal support she and Michael Jackson personally agreed to several years ago," George said.

The couple divorced in 1999 with Rowe giving Jackson full custody while she got a $8.5 million settlement, according to court documents. Jackson later agreed to additional support.

Jackson's lawyer has not responded to requests for comment Tuesday.

The Jackson family lawyer said last week that they were working to "privately and amicably resolve" the matter.

A child custody court hearing, which had been set for this week, was delayed until next Monday at the request of lawyers for Jackson and Rowe, a court official said.

The New York Post, quoting an unidentified Jackson family source, reported Rowe had agreed to drop any custody challenge for a $4 million payment.

Watch a discussion of the legal issues of the case »

"Among the several contenders for overzealous and inaccurate sensationalism, the New York Post has now seized top honors," George wrote to the paper. "It would be easier to identify those few background facts that are accurate than to catalog the number of blatant falsehoods in your story."

Jackson and Rowe married in 1996 and their first child -- Michael Joseph Jackson Jr. -- was born in February 1997. A daughter -- Paris-Michael Katherine Jackson -- was born the next year.

The two met when Rowe was working as a nursing assistant in the Beverly Hills office of Jackson's dermatologist, Dr. Arnold Klein.

Rowe said in a 2003 interview, later obtained by ABC News, that she became close to Jackson in 1996 when she consoled him after his brief marriage to Lisa Marie Presley ended.

She told the interviewer they married only to "prevent some of the taboo of a child out of wedlock."

She gave up parental rights to Jackson in 2001, but she changed her mind more than two years later and sought temporary custody of the children. A California appeals court later ruled her rights were improperly terminated, opening the door to a possible custody battle.

Rowe claimed in the 2003 interview that she still had "some influence" over how Jackson raised the children, citing his practice of covering their faces in public as her idea. "That was my request, not his," she said.

She said the children don't call her "mom" because she did not want them to.

"It's not that they're not my children, but I had them because I wanted him to be a father," she said.

Rowe, 50, lives on a horse farm in Palmdale, California, about 60 miles north of Los Angeles.