LOS ANGELES, California (CNN) -- Michael Jackson's daughter touched the hearts of millions when she bid a tearful farewell to her father at his memorial service in a rare public appearance. 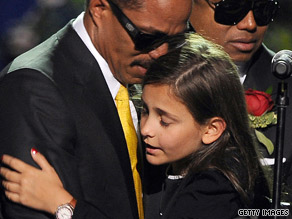 Paris Jackson, 11, is consoled by her uncle Marlon Jackson after delivering a tearful tribute to her father.

With her brief speech, 11-year-old Paris Jackson also shocked the event's organizers, who said her appearance was not a planned part of Tuesday's star-studded tribute to the "King of Pop" at Los Angeles' Staples Center.

"Ever since I was born, daddy has been the best father you could ever imagine," she said, fighting back tears as relatives consoled her.

"And I just want to say that I love him so much," she said as she burst into tears and sought refuge in the embrace of family members.

For many watching, Paris' appearance marked a rare glimpse of a child who has spent most of her life shielded from the public.

Born to two mothers -- Jackson's ex-wife Debbie Rowe and an unidentified woman who reportedly served as a surrogate -- Jackson's three children lived and traveled the world with him, their faces often covered by veils and masks when appearing in public.

In its execution, the speech appeared to be a surprise to those onstage and off.

"It was a surprise they were there. All of us who know them were delighted they were strong enough to come and feel this love and great outpouring for their dad," Kenny Ortega, the choreographer ("Dirty Dancing") who was directing Jackson's "This Is It" comeback concerts in London, England, told CNN's Campbell Brown. "We would've never expected that they had the strength. It was beautiful."

Ortega, a longtime Jackson colleague who helped design the singer's 1990s tours, said planners left the end of the show open for family members to speak if they wished to, but he was surprised when the Jackson clan -- among them, his siblings and children -- went onstage for the two last songs, "We Are the World" and "Heal the World."

Marlon Jackson told the crowd that his sister, pop star Janet Jackson, wished to say some words. Instead, Janet appeared to encourage Paris to come forward from the sea of black dresses and suits and take the microphone, adjusting it and stroking the child's hair as Paris delivered her words.

Ortega said he was touched by Paris' speech.

"Michael was so close with these beautiful children," he said.

The heartfelt display sparked a groundswell of emotion in the auditorium and around the world, where millions of viewers watched the service on television and the Internet.

"The saddest moment was when Michael Jackson's daughter spoke," said Angelina Martinez, who attended the service with her daughter, Jessica.

"She was really in pain. Everybody was crying inside," she said. "It was beauty combined with sadness."

Attendees, performers and speakers alike struggled for composure throughout the two-plus-hour event, which featured performances from Lionel Richie, Jennifer Hudson and Usher.

But to many, Paris' tribute cast Jackson in the one role few have experienced him as: a father.

"It was very, very touching, and really it was an example of the good parent Michael was, because when I was at Neverland and with the kids he really was a good loving father -- they had a fantastic relationship, and they were very close-knit," Stuart Backerman said.

"So to see Paris come on in such an emotional moment and obviously give her heart out to her father was very, very touching."

Others saw the tribute as a whole as Jackson's final legacy to his children.

"There are those I feel in years to come, will try to distort him to his children ... and not understand that the real challenges that Michael Jackson had to seriously face and did face and make a difference," the Rev. Al Sharpton said.

"And I thought it was very important to put in context for his children what he dealt with in history and what he was able to do."

All About Michael Jackson • Al Sharpton