(CNN) -- Fans around the world have gathered at arenas and record stores, big screens, parks and makeshift shrines, to watch the memorial service of Michael Jackson and pay homage to their idol. 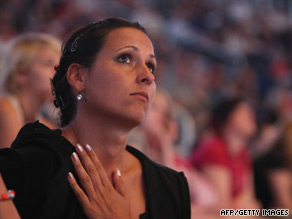 A Michael Jackson fan in Berlin watches footage of the memorial concert.

Fans began arriving at least three hours before the event was due to begin, Pleitgen said. "He [Jackson] connects races, religions and ages," said one fan, "his music connects the world."

Many fans were moved to tears when Jackson's daughter Paris Katherine wept as she called the singer "the best father you could ever imagine." Pleitgen added: "A lot of people got very wet eyes."

South African former president Nelson Mandela paid his respects to Jackson in a statement read to the audience at the Los Angeles memorial by singer Smokey Robinson.

"Michael became close to us after he started visiting and performing in South Africa regularly. We grew fond of him and he became a close member of our family. We had great admiration for his talent and that he was able to triumph over tragedy on so many occasions in his life," Mandela said. "We mourn with the millions of families worldwide."

In the southern Chinese enclave of Hong Kong, fans carried flowers and Jackson paraphernalia, such as a doll and record, at a memorial.

Watch Jackson tributes pour in from around the world »

"I cannot accept MJ has already left us, and I think we should come here and do something for him and express our feeling to show that we really miss him," said one man.

Hundreds of British fans in London braved torrential rain to watch a giant screen outside the city's O2 Arena, where Jackson was scheduled to play a series of 50 concerts from July 13. Many more fans are expected to converge on the venue next Monday to mark what would have been the first of his concert dates.

See images of Jackson fans from around the globe »

"I am still in denial," said Jenny Keme, 21. "We're going to stay here to the end of the ceremony even though it's pouring. He had such a gentle soul, that's what I love most about him."

Celeste Dixon, 28, added: "He is the King of Pop, not was. No one will ever be worthy of him, he is bigger than life. Without Michael Jackson breaking barriers, Barack Obama would never have made it."

Elsewhere in London the cast of musical "Thriller- Live" paid their own tribute during the evening performance at the Lyric Theatre, with cast, crew and audience observing a minute's silence. "Many of them were in tears during it," reported CNN's Phil Black.

The theater has become a shrine to Jackson, with devoted followers holding vigils and leaving cards and messages at the building's entrance.

In Japan, meanwhile, hundreds of fans gathered at a Tower Records store -- where Jackson twice visited -- in Tokyo to watch his videos on a big screen. Followers were even offered the chance to take a photograph next to a cast of a footprint left by Jackson when he last visited.

In a bar in New Delhi, the Jackson memorial gathering was small -- only a dozen or so people. On the wall of the bar that usually only plays hard rock, Jackson's music was blasting, candles were lit underneath two framed pictures of Jackson and customers had written messages saying goodbye. The bar manager said: "We all grew up with Michael Jackson. Other generations had The Beatles, or Elvis Presley. Michael is our generation."

And on the streets of Beijing, people were greeted by a Jackson look-alike, 28-year-old Wang Jie, who performed ahead of the memorial. Though Jackson never himself performed in China, he is loved in the country. Members of the official Michael Jackson Fan Club rented a hotel room so they could watch his funeral broadcast live.

Thousands of other fans worldwide following the coverage online via CNN and Facebook, with many again moved by the comments of Jackson's daughter about her father.

"Never cried so much ever since my dad passed away," said Facebook user Rinoa S Koh from Singapore, while user Nomar Levey in Jamaica added: "OMG Tears are really pouring."

Facebook user Manu Tyagi from India said: "The first English songs I ever heard in India were MJ songs... grew up with his music... and never though we would see him die so soon. He achieved his destiny before he passed to the kingdom of god! Really hope he rests in peace. He was the best."

As Jackson's coffin casket was carried out of the Staples Center, Facebook user Marika Papazoglou in Greece said: "RIP Michael. We love you more."

Anouk Lorie contributed to this story