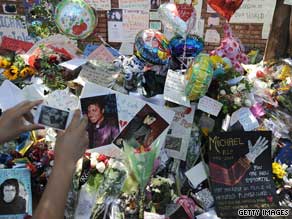 Fans have set up impromptu shrines to Michael Jackson, including this one at his family's house.

Thousands are expected to swamp Los Angeles, California, to mourn him Tuesday at the Staples Center, and the accompanying media crush will be enormous.

The tribute to the King of Pop at Harlem's Apollo Theater earlier this week drew coverage from all over the world, along with a public turnout in the thousands.

Given the feverish interest in all things Jackson, the Los Angeles memorial could be one of the most-viewed events of all time.

"This will obviously be a huge media event, and with Web streams of the funeral, it may be impossible to say for sure how many people watched once all is said and done, because there's still no comprehensive way to measure Web viewing," said Toni Fitzgerald, of Media Life, in an e-mail interview.

A handful of events have earned the kind of worldwide coverage to put the world on pause, if only for a moment. The 1963 assassination of John F. Kennedy "had the nation locked in a trance for two or three days," recalled TV critic Ed Bark of UncleBarky.com.

The world audience for the Apollo 11 moon landing has been estimated in the hundreds of millions. The BBC estimated 2.5 billion people watched the 1997 funeral of Princess Diana.

The numbers are easily exaggerated -- nobody knows how many people are watching in groups or in public places -- and the Web has complicated matters further. But in a multichannel, satellite TV, computer-and-cell phone world, the Jackson memorial could have an audience in the hundreds of millions.

It was first believed the event would take place at Jackson's Neverland Ranch. But the family announced Thursday that it will hold a private ceremony Tuesday, and then a massive public memorial service at the Staples Center. Fans had until 6 p.m. Saturday to register for free tickets to the memorial service. Organizers used a computer to choose 8,750 names from 1.6 million who registered since Friday.

Watch a tour of Neverland »

"You have to go back to the Beatles, the death of John Lennon perhaps, and the death of Elvis Presley to find a comparable figure in, not just pop music, but pop culture," said Entertainment Weekly critic-at-large Ken Tucker. (EW, like CNN, is a unit of Time Warner.) "And Jackson so self-consciously turned himself into not just an American pop icon but a global pop icon. I think this does have worldwide implications and interest."

See how interest in Jackson's music has skyrocketed »

The circumstances of Jackson's death have led to comparisons with Presley's in 1977, but in terms of coverage, the two can't compare. The news wasn't even the top story on CBS' "Evening News," Bark recalled, and there certainly wasn't wall-to-wall nationwide live coverage of his funeral. A public viewing drew about 30,000 fans; the funeral, two days after his death, was held in Graceland's living room.

But Bark said there are parallels, at least in terms of coverage, with the Kennedy assassination.

"These days it's so much harder to get a bulk audience on any given venue the way the [broadcast networks] did back then, but still the enormity [of the event] -- it's the syndicated tabloid shows ... and TMZ and all the cable networks devoting lots of attention to it, [and] the broadcast networks can't seem to do enough specials in prime time," said Bark. "I do think it's comparative but in a very different way."

Officially, the sorts of events that have attracted the largest mass audiences have been scheduled entertainment or sports programs. Sixty percent of America watched the 1983 "M*A*S*H" finale; more than half watched the 1980 "Who Shot J.R." episode of "Dallas" and the 1977 "Roots" conclusion.

The Beatles' first appearance on "The Ed Sullivan Show" in 1964 drew about 45 percent of the country. The Super Bowl is routinely the year's most watched program, with audiences north of 80 million -- about 40 percent of U.S. television households.

Although interest in Jackson has been high, the number of viewing choices (and, perhaps, the traditional decline in summer viewing) has kept the ratings for individual Jackson-oriented shows down.

"Jackson's death came up in just about every conversation I had from Thursday to Sunday, and yet only 5 million people tuned in to some of those broadcast specials," Media Life magazine's Fitzgerald observed.

"I expect you'll see very big tune-ins on the cable news networks and on BET, if they cover it; they had huge numbers for their BET Awards focused on Jackson over the weekend," Fitzgerald said. The BET Awards was watched by 10.7 million, the most ever for a cable awards show.

"With the celebrity factor thrown into the funeral, who'll be there, who'll talk, I would guess tens of millions in the U.S. will watch it on TV," she said.

It is certain is that the news media will be there in force.

"I guess we're all going to wait and see what the spectacle is," Bark said. "There may be no precedent for this."