(CNN) -- Bubbles gained fame over two decades ago as Michael Jackson's simian companion. Now at age 26, Bubbles has retired to the Center for Great Apes outside Wauchula, Florida. 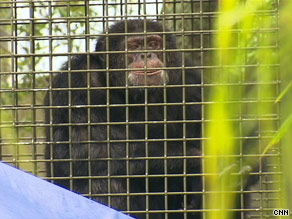 When Bubbles was 5 years old, he and Jackson toured Japan, where the chimp moonwalked for the media. Bubbles' new home has many places for him to hide from the limelight. The nonprofit's tropical forest setting covers more than 100 acres.

Patti Ragan, director for the Center for Great Apes, explained how Bubbles and 41 other chimpanzees and orangutans spend their day:

"They relax. They take naps together. They might go up in the top of the cupola," she said. "They go out in the chutes and lie under a tree in the tunnel system.

"They groom each other and they fight and they have arguments, too," Ragan added.

There was no argument from Ragan when the Center for Great Apes was asked to take in Bubbles and 21 other animals from Bob Dunn's training facility in California that closed in 2004.

Dunn had been Bubbles' trainer and had purchased the chimp for Jackson at about 8 months old.

When Bubbles became too big and strong for Jackson to keep as a pet, Dunn took the chimp back and housed him at his training facility.

"When they grow up and they become an adult, they become very strong -- 170 pounds, three times the strength of their weight," Dunn told CNN in an interview while still caring for Bubbles. "It's very hard to have to retire them, because you get so attached to them, it's just like telling your kid to go away."

Jackson's inability to keep Bubbles was a perfect example of why chimps should never be pets, Ragan said. She said they can get too strong.

"This was one of the most successful and wealthy individuals at the time he had Bubbles, and it was not even appropriate for him to keep Bubbles after a certain age," Ragan added.

Bubbles was born in Texas in 1983, and it's thought he was born in a biomedical facility before being sold. When he lived with a supercelebrity such as Jackson, Bubbles could be seen in videos, posing for fan pictures, attending a news conference, his likeness appearing in a Michael Jackson video game.

"Most of our chimps recognize their former owners," Ragan said. "They get very excited to see them, and I am sure he would have recognized him."

The public might not recognize Bubbles. He's aged since his moonwalking days. But he is alive and well, feasting on cucumbers and bananas at the sanctuary, where the care for each animal costs about $17,000. Bubbles might be out of the public eye, but Ragan doesn't want his fans to forget him.

"Probably the best tribute that we could pay to Michael Jackson here is to just take excellent care of Bubbles, because I know he loved Bubbles."