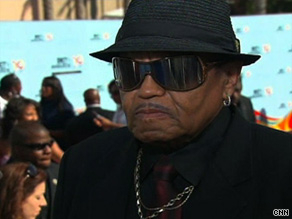 "My entire family wanted to be here, but it was just too painful," she said, holding back tears.

"To you Michael is an icon. To us Michael is family. And he will forever live in all of our hearts."

The star-studded BET Awards was an appreciation of Michael Jackson, who died Thursday at age 50.

He was "the greatest star in the world," Joseph Jackson, father of the late entertainer, said on Sunday night.

"I wish the world had recognized him when he were living," Joseph Jackson told CNN's Don Lemon outside the Shrine Auditorium in Los Angeles, California. "Right now he's bigger than ever. But I wish he was here to see all this, to hear all this."

When asked about circumstances surrounding his son's death, he said, "I have a lot of concerns but I can't get into that. ... I don't like what happened."

The awards opened with a fleet-footed New Edition, with Bobby Brown, performing an energized version of the Jackson 5 hit "The Love You Save," to raucous praise.

Host Jamie Foxx wore a red, leather "Beat It" jacket for his opening monologue and did his best to imitate Jackson's backward glide across the floor.

See photos of the show's tributes »

"If it wasn't for Michael Jackson, people like Justin Timberlake would be selling curly fries in the valley," the actor said. "I mean that with love." iReport.com: Fans share love for Jackson

This year's performers included, Beyonce, Keyshia Cole and R&B artist Neyo who performed a hard-hitting tribute to the 1990s with appearances by acts Keith Sweat, Guy and Bell Biv Devoe.

Watch celebrities walk the red carpet before the show »

The presenters included the past and present Uhura of "Star Trek": Zoe Saldana, who starred in the film, and Nichelle Nichols of the TV show.

The show also honored the soulful Ohio trio, The O'Jays, who were presented the Lifetime Achievement Award.

Tevin Campbell performed a rendition of The O'Jays classic "Forever Mine." Johnny Gill, Tyrese and Trey Songz performed a rumbling, soulful medley of The O'Jays hits that had some in the audience wondering if Songz was older than his years.

"When we heard the news of Michael Jackon's passing we knew immediately we'd have to change the nature of this show," she said.

"We put the show together in a matter of three or four days. It's truly been a labor of love for us," Lee said.

All About Michael Jackson • The Jackson 5