LOS ANGELES, California (CNN) -- Two days after the death of Michael Jackson, the family of the pop superstar thanked his fans for their condolences and support in "one of the darkest moments of our lives." 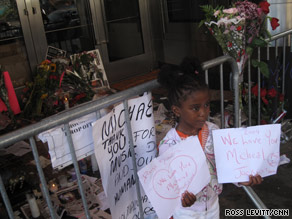 A girl holds up signs in memory of Michael Jackson outside New York's Apollo Theater on Saturday.

"Please do not despair, because Michael will continue to live on in each and every one of you," family patriarch Joseph Jackson said in a statement to People magazine obtained by CNN.

"Continue to spread his message, because that is what he would want you to do. Carry on, so his legacy will live forever," the statement told fans.

"Our beloved son, brother and father of three children has gone so unexpectedly, in such a tragic way and much too soon," the statement said. "It leaves us, his family, speechless and devastated to a point, where communication with the outside world seems almost impossible at times."

Family members including Jackson's mother, Katherine, were at the estate Jackson had rented in Holmby Hills.

Around midday, two moving vans pulled up. One left empty, and the other apparently contained objects from the house. Other vehicles came and went, including a silver Range Rover driven by a plain clothes police officer.

Meanwhile, the doctor who may have been the last person to see Michael Jackson alive was expected to meet with police Saturday along with his lawyer, an associate of attorney Ed Chernoff said.

Matthew Alford, an associate of Stradley, Chernoff and Alford law firm in Houston, Texas, said Dr. Conrad Murray, who is represented by Chernoff, was upset but willing to cooperate.

The ongoing meeting could spill into Sunday, according to the firm.

"It's a human tragedy, and he's upset obviously over the loss of Mr. Jackson. But he is not a suspect in the death of Mr. Jackson," Alford said. "We intend to cooperate fully."

"Is important to interview everybody that was in contact with Mr. Jackson immediately prior to his demise particularly anyone involved in his medical care," Beck said. "So it's extremely important to talk to his doctor."

Police said the doctor has been cooperating.

Jackson's family suspects that Murray can answer some questions about the singer's death, but they have been unable to contact him, the Rev. Jesse Jackson told CNN on Saturday.

The parents need to know what happened in the last hours of Michael Jackson's life, Jesse Jackson said.

"The routine inquiry is now an investigation," Jesse Jackson said. "They (Jacksons) didn't know the doctor. ... He should have met with the family, given them comfort on the last hours of their son."

Alford said Murray has "not been hiding out. He's just being prudent."

Detectives impounded Murray's car, which was parked at the singer's rented home, because it may contain evidence related to Jackson's death, possibly prescription medications.

Police have released no information on what they may have found.

Alford said he did not have any details.

"I have no information as to what if any treatment, or course of treatment he was doing for Mr. Jackson at all," he said.

Michael Jackson died Thursday, and an autopsy was performed the following day. A spokesman for the Los Angeles County coroner's office told reporters Friday that more tests must be conducted before a cause of death can be determined. That could take four to six weeks.

The coroner said there was no indication of external trauma or foul play.

The 50-year-old pop star was discovered unconscious Thursday by paramedics at his home, where Murray apparently had tried to revive him. He was rushed to a Los Angeles medical center, where he was pronounced dead.

"They need an independent autopsy to get even more answers to questions that are now being driven by the gap between when Michael was last seen alive and was pronounced dead day before yesterday," Jesse Jackson said.

Jackson had been preparing for a comeback tour -- aimed at extending his legendary career and helping him to pay off hundreds of millions of dollars in debt.