CEBU, Philippines (CNN) -- Amid the tropical heat of a Philippine prison, convicted murderers, rapists and drug dealers on Saturday paid tribute to Michael Jackson with a reprise of their YouTube dance hit, "Thriller." 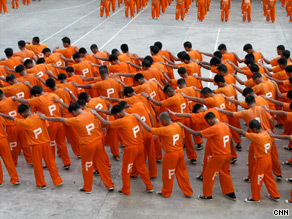 Inmates at the prison in Cebu perform their tribute to Michael Jackson Saturday.

A rendition of Jackson's 1980s smash hit by prisoners at the Cebu Detention and Rehabilitation Center in the central Philippines garnered more than 24 million views since 2007, when prison supervisor Byron Garcia first uploaded it to the video-sharing Web site.

The prison has since posted other dance videos, including performances to Van Halen's "Jump," Queen's "Radio Ga Ga," and Phil Oakey and Giorgio Moroder's "Together in Electric Dreams."

Jackson, known as the "King of Pop," died Thursday in Los Angeles, less than two weeks shy of the first in a series of comeback concerts in London, England.

When he heard the news, Garcia, himself a fan of the 50-year-old pop icon, organized a free tribute performance by inmates for local people in the prison courtyard.

Dancing was introduced at the prison in 2007, as a means of rehabilitating prisoners at a facility once notorious for its gang problem.

Every able-bodied prisoner must dance. If they refuse, they lose privileges, mostly conjugal visits. According to Garcia, the dancing occupies up to five hours a day. However he rejected claims he's abusing the prisoners' rights by forcing them to dance so many hours a day.

He said it gives them a renewed sense of worth and confidence, breaking them of their violent ways. He is convinced his prison is a model for prison authorities everywhere, an example of how to crack the plague of violent prison gangs.

"It brought back their self esteem. We have happy inmates now -- we don't want to go back to the old jail where we had mad, sad inmates," he said.

In searing temperatures, 1,400 men in bright orange tracksuits performed the 15-minute "Thriller" routine perfectly. They rehearsed for 10 hours the previous day, finally stopping at 3 a.m. to rest ahead of the show.

The superbly-choreographed moves, energy and obvious enthusiasm of the prisoners had the audience -- swelled by journalists from around the world -- captivated the audience. Several inmates even invited people from the crowd to dance with them.

"I never thought I would ever find myself dancing with a prisoner," one excited local said.

A local journalist even described the performance as Asia's best way of paying tribute to Jackson.

Garcia, who says the prison has witnessed no violence in three years, paid tribute to the performers. "I'm so proud of them," he said. "They got the dance exactly right."

Although it was "probably wishful thinking," he added that he had actually wanted Michael Jackson to come to Cebu to dance and play the role himself. "Now it's not going to happen," he said mournfully.

Convicted robber Mavin Cabido, 23, said: "I feel so sad as we idolize him really. The moonwalk is my favorite -- I like that."

All About Michael Jackson • Philippines