By Danyel Smith
Special to CNN

Editor's note: Danyel Smith is the chief content officer of Vibe Media Group and the editor-in-chief of Vibe. 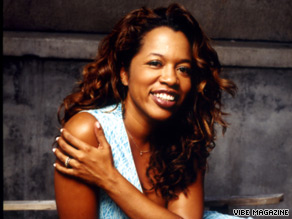 Danyel Smith says Michael Jackson sacrificed himself in the name of his art.

(CNN) -- It falls to me to prepare a statement on behalf of Vibe magazine when someone is promoted, when there is trouble, or when something major happens in the world of pop.

It occasionally falls to me to write an obituary or a tribute when an entertainer dies. It's a part of my job. One has to do it quickly, and I've never been prepared. Yet I've been prepping for this one my whole life. Michael Jackson has died at the age of 50.

The sorrow at his passing is palpable, and wet, and illogical -- in my 20 years of being a critic and an editor, I've never met him. But this is a death in the family. I've known Jackson's work since I was 5 years old and was given The Jackson 5's "ABC" as a gift.

He was on the surface the most uncomplicated of all boys -- beautiful, emotional, untouchable, ours.

Michael has bruised my heart many times -- his antics and the accusations, his seeming desire not to be, at least physically, who he'd been. Which is who I am. But as his funeral is prepared, I, like the Jackson brothers sang with optimistic melancholy in 1976, think about the good times.

That mixes in with girls fainting at the sight of him when he was barely a teenager; which mixes with the many sold-out tours, and with Michael collaborating with Quincy Jones on 1979's "Off the Wall" and 1982's "Thriller."

There is the alleged abuse inflicted on Jackson and his brothers by his father, Joe, along with the strong love and late rivalry with his superstar sister, Janet.

There is the magic and melodrama of Motown. The accusation of child abuse (no charge; he agreed to a settlement in a lawsuit against him in 1994), and the 2005 trial in which Jackson was acquitted of child molestation and other heinous charges.

There is the drastic change of his skin color, the radical narrowing of his nose, the short marriage to Elvis Presley's daughter, the friendship with Emmanuel Lewis, the 13 Grammys, the 13 No. 1 singles, the two inductions into the Rock and Roll Hall of Fame, and the haunting, otherworldly performance at Motown's 25th Anniversary special.

The way he integrated MTV in 1983 with "Billie Jean," the "We Are the World" extravaganzas, the face masks, the oxygen tanks, the Neverland Ranch -- all that mixes in with everything from "Stop the Love You Save" to "Dancing Machine," "Wanna Be Startin' Somethin'," "P.Y.T.," "Man in The Mirror," adding up to the more than 750 million albums sold worldwide... I mean. And this is not the half, the tenth, the thousandth of what he was.

It comes down to the fact that Michael Jackson gave. Whether he chose to or did it because it was all he knew, he sacrificed himself in the name of his art.

Jackson gave almost his entire life on this planet to singing, to dancing, to recording, to performing. He practiced, he watched James Brown and Jackie Wilson and Diana Ross and he watched his brothers. He bent, when he had to, to the will of those who could have done better by him.

He was knowing enough about who he was to pretty much demand we all call him The King of Pop, but it was the public shyness, the nerdiness of Michael Jackson that endeared.

The whispery voice juxtaposed with the explosive grace he demonstrated on stage and on record. The tenderness, especially of his childhood work, and of "Off the Wall," that seduced, and that inspired loyalty. He made me a believer. He made millions believe.

I saw The Jacksons in 1981 in Los Angeles on the Triumph tour, sat in the nosebleeds and was living a dream. It was ecstasy, for what I know of it -- unadulterated joy at witnessing. I saw The Jackson 5 live in 1972 at the Circle Star Theater in San Carlos, California. My mother got tickets for herself, my sister and me for my 7th birthday.

What moves a heart? What makes a fan? I deserted my family and dashed toward the revolving stage.

I told people until I was in my teens that Michael Jackson touched my hand. I know he didn't. I never got close, I was 7 and my mother grabbed me back. I know he didn't touch me, but he did touch me. I swear he did.

Is it as simple as saying that an era has closed, that part of our childhood and teen years has died with him, that we have to face true adulthood with its Adult Contemporary radio formats, logical love, and guided tours through Neverland?

Is the world grieving Michael Jackson, or mourning for a time when such earnest fandom was possible?

Michael was truly something rare, the last of an endangered species. That he is the best entertainer who ever lived I will argue for life, and I come from an Elvis Presley and Motown household. iReport.com: Share your favorite memory of Jackson

In his absolute prime (1974-1986) there was no holding back. There was no cool. Michael Jackson had a sense of humor, but there was little he did, as a performer, with a wink or a nod to himself at our expense.

He sometimes got tired of singing "ABC," and the ditties of his (and my) childhood, but he was working. We could see it. It's a dying art. We took and take pride in it. For a time, with the white gloves and flooding pants and loafers and odd military jackets, we emulated it.

He gave himself to the world. And Michael Jackson left nothing but blood on the dance floor.

The opinions expressed in this commentary are solely those of Danyel Smith.