(CNN) -- U.S. fans of Michael Jackson are pouring out their grief through music and dance, impromptu shrines at symbolic locations and heartfelt remembrances online. 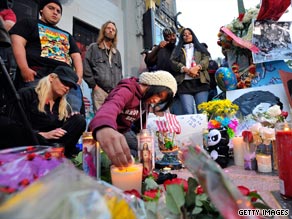 Jackson's star on the Hollywood Walk of Fame was surrounded hours before dawn Friday by candles, flowers, posters and balloons. As the sun rose, a man crouched on the sidewalk and painted a portrait of the pop star, who died suddenly on Thursday.

"This is a very sad day here in Hollywood, California," sobbed Melissa Fazli, a CNN iReporter. "This is very, very sad. I can't believe it."

The star emblem had been covered until almost 3 a.m. by a red carpet for the premiere of the Sasha Baron Cohen film "Bruno" at Grauman's Chinese Theater, but fans started leaving mementos as soon as the carpet was removed. The film's producers reportedly cut a scene referencing Jackson, at least for the premiere.

"He was an innovator," a fan named Delores said outside the theater. "He's basically an icon in his own time -- legendary. It's going to take years [to sink in] that he's gone, because he's always with me. ... I'm just trying to assess it all right now. I'm still mourning, and at the same time missing him. It's a little bit much to bear."

See what celebrities had to say »

Fans gathered near the gates of the Los Angeles home where the King of Pop collapsed Thursday, and hundreds more assembled outside the UCLA Medical Center, where Jackson was pronounced dead.

The U.S. fans' reaction was part of a worldwide outpouring of grief over Jackson's death and celebration of his life and art. See how people reacted in other countries

People stopped in their tracks Thursday in New York's Times Square, staring up at the giant TV screens bearing news of Jackson's death. Some people set up lawn chairs in the evening.

Watch the reaction on Times Square »

Hundreds of people gathered in front of the Motown Historical Museum in Detroit, Michigan, a two-story house where the Jackson 5's recording career began in 1969, according to CNN affiliate WDIV-TV. Fans built a makeshift shrine to Jackson, whose hits could be heard booming from passing cars, the station reported.

View a timeline of Jackson's career »

Watch fans gather at the home »

"I knew Michael. I only lived three blocks from him myself," Gary resident John Moore told WRTV-TV. "It's a really sad day. I'm very hurt and disappointed right now. He was a great guy."

"Michael Jackson was a complicated human being who was [denied] a childhood in order to provide us with great musical and dancing entertainment," Willies went on. "But with all his wealth and success he never seemed happy with himself. He never viewed himself as we viewed him: simply the best entertainer alive. May he rest in peace, his demons left behind."

CNN's Kara Finnstrom and Dan Simon contributed to this report.