Punk pioneers New York Dolls get it right this time

ATLANTA, Georgia (CNN) -- Their timing was a little off. 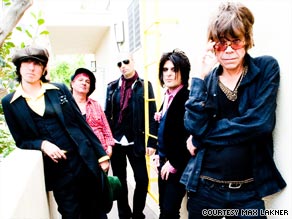 The New York Dolls recently released their second album since regrouping. The new CD is "'Cause I Sez So."

In January, the New York Dolls arrived in Hawaii to record their new album, "'Cause I Sez So" (Atco), with producer Todd Rundgren. The producer, who has a setup on the island of Kauai, assured the band that the weather would be beautiful.

"It rained every day," said guitarist and singer David Johansen in Atlanta's Center Stage theater Friday, where the band was scheduled to play later that day.

"It rained just enough to disrupt our recording plans," added guitarist Steve Conte. "Todd has this house with one wall open to the elements, and I said, 'What happens when it rains, Todd?' and he said, 'It never rains here.' Well, the next day, all our gear got soaked, so we had to move to another house."

That kind of timing is a familiar subject to the Dolls, which formed amid the grit and grind of early '70s New York but broke up before they could take advantage of the success of followers such as the Ramones, Blondie, the Sex Pistols and Talking Heads.

The band "created punk rock before there was a term for it," writes Allmusic.com's Stephen Thomas Erlewine.

The original band, made up of Johansen, Sylvain Sylvain, Johnny Thunders, Arthur Kane and Jerry Nolan, were known for ferocious live performances that blended elements of the Rolling Stones, Velvet Underground, glam and girl groups -- down to the occasional wearing of drag.

"We came out of the era of stadium rock ... when rock 'n' roll was put together by the industry," Sylvain recalled. "We take like a Little Rascals approach to show business -- 'We're bored! What are we gonna do? Well, let's start a show!' And that's basically how the Dolls came about."

Watch Johansen describe the kids who followed them down the street »

Sylvain, with Johansen one of the two survivors of the old Dolls (Thunders and Nolan died in the early '90s, and Kane died of leukemia in 2004), is philosophical about the band's inability to break through. "It's what happened to us," he said, adding, "once we did break up, unlike other bands, we were actually successful individually."

It's been on commercials for car dealers, featured in movies and makes regular appearances at wedding receptions.

It's not so much the song, he says, but the reaction it inspires.

"He'll say, 'They played that song at my sister's wedding, and that bum she married ran off with a chorus girl.' And I'll say, 'Wait a minute, wait a minute! I wasn't even there!' "

The band came back together at the request of Dolls fan Morrissey, who was overseeing a festival in London, England. "He asked us to do a night for him. And we decided that that would be a lot of fun," said Johansen. "We actually came into this thing just to do one show. It wasn't like we said, 'We're going to have some kind of re-uuuunion thing,' " he adds, mockingly slurring "reunion."

But one thing led to another, and before long the Dolls were a working band again. In 2006 they released "One Day It Will Please Us to Remember Even This." "'Cause I Sez So" came out in May.

It's a familiar mix of hard rock -- the bitter lashing of the title cut, the ecstatic grunge of "Exorcism of Despair" -- with Johansen playfulness ("Nobody Got No Bizness"), classic pop ("Lonely So Long") and even a reggae remake of the first album's "Trash."

Johansen -- who regularly hosts "David Johansen's Mansion of Fun," a Sirius radio show reveling in his broad musical tastes -- is proud of the band's agility.

"When we get together to play, it's not like we're punching a clock and doing a recreation of yesterday," he said. "We go on every day with a fresh attitude and just start playing. The music can go everywhere."

"We don't really think about [being pigeonholed]," added Sylvain. "We just kind of fly by the seat of our pants. It's for everybody else to see it whatever which way they do. ... Call it punk, call it whatever you want, but it's rock 'n' roll to us."

The new album came together in about a month -- half as long as the first album, also produced by Rundgren, back in 1973.

Johansen, Sylvain and the rest of the band -- Conte, bassist Sam Yaffa and drummer Brian Delaney -- interact as much like a comedy act as a rock band, with frequent pauses for deadpan jokes. It's a vibe that's apparent on " 'Cause I Sez So," which has earned a number of positive reviews.

"The unlikely resurrection of the New York Dolls is solidified by this second recent album, an output that now matches in quantity and mirrors in quality their epic early-'70s sprint," wrote Billboard's Wayne Robins.

The group is touring the United States and Canada throughout June before leaving for Europe in mid-July. The audiences, Sylvain said, have been appreciative -- and broader than in their downtown New York past.

"We've had some great audiences. And of all ages, actually," he said.

Johansen interrupted. "When the kids come, we give them a balloon."

Sylvain smiled. "And earplugs," he said.