(CNN) -- She was a call girl working the streets of Sin City. He's a guitarist in a heavy metal band. They found commonality in their Christian faith and Friday evening, the two were married in a Las Vegas, Nevada, ceremony broadcast live via the Web. 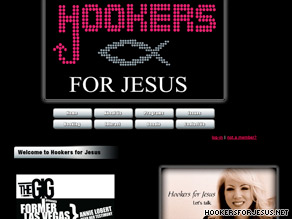 Annie Lobért, who founded Hookers for Jesus, and musician Oz Fox of the Christian band Stryper said their "I do's" at the Church of South Las Vegas in front of an applauding crowd and an audience on the Internet. The wedding had been widely touted on several Christian Web sites.

Lobért, 41, walked up to the stage in a white strapless gown, gloves and veil. Earlier this week, she wrote on her MySpace blog: "I am getting married. It's about time."

She had worked as a prostitute for 11 years, making as much as $500 an hour. She said she hit rock bottom when she overdosed on cocaine and everything went black, according to an ABC interview posted on her Web site. She asked Jesus to help her and became what many jokingly call a "porn-again Christian."

Lobért says her mission now is to save the souls of women who sell their bodies. She often spends time at night on Las Vegas streets handing out Bibles to prostitutes and seeking to convince them there is a better way to make a living.

The Hookers for Jesus Web site describes the organization as "an international, faith-based organization that addresses the realities of human sex trafficking, sexual violence and exploitation linked to pornography and the sex industry."

Before he administered the vows, Pastor Benny Perez said Lobért was a shining example of Christ's love for everyone.

Fox, 47, is a longtime member of Stryper, which stands for Salvation Through Redemption, Yielding Peace, Encouragement and Righteousness. The band's albums include "Reborn: and "In God We Trust."

All About Las Vegas • Prostitution and Sex Workers • Marriage