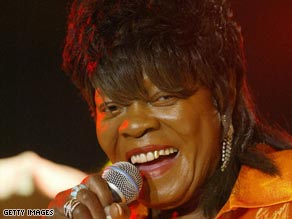 Koko Taylor performs in Spain in 2005. Her last performance was in May of this year.

Koko Taylor, a West Tennessee sharecropper's daughter who went to Chicago, Illinois, with "35 cents and a box of Ritz Crackers" at 24 and wound up an award-winning blues legend, died Wednesday at her Chicago home at 80.

She died of complications from a May 19 surgery for gastrointestinal bleeding, her Web site reported.

Just days before the surgery, Taylor won her 29th Blues Music Award, picking up the trophy for Traditional Female Blues Artist Of the Year. She performed her signature song, "Wang Dang Doodle," at the ceremony.

Known for her powerful vocals, Taylor was inducted into the Blues Hall of Fame in 1997, won the Blues Foundation Lifetime Achievement Ward in 1999 and was awarded a National Endowment for the Arts National Heritage Fellowship in 2004.

She also won a Grammy Award for Best Traditional Blues Album in 1985 for her album "Queen of the Blues."

Taylor was born Cora Walton and picked up the nickname "Koko" because of her love of chocolate as a child. She also displayed a love of singing from an early age.

She and her future husband, the late Robert "Pops" Taylor, traveled to Chicago in 1952, where Pops Taylor worked for a packing company while Koko Taylor cleaned houses. By night, the two roamed Chicago's blues clubs, where Koko Taylor sat in with top bands and was soon a popular guest artist.

But it took 10 years for Koko Taylor to record on her own, after Willie Dixon got her signed to Chess Records and produced several singles, including "Wang Dang Doodle."

Taylor landed a permanent home with Alligator Records when Chess was sold in 1975.

Her final performance was the May 7 blues award show, but earlier in the year she performed at the Kennedy Center Honors program honoring actor Morgan Freeman.

Throughout her lengthy career, she shared the stage with nearly every blues performer imaginable, from Junior Wells and B.B. King to Taj Mahal and Muddy Waters. She was a strong influence to later performers, including Bonnie Raitt and Janis Joplin.

All About Blues Music