LOS ANGELES, California (CNN) -- Singer Rihanna cleared her schedule to testify next month in the case against singer Chris Brown, who is charged with brutally beating her earlier this year, her lawyer said. 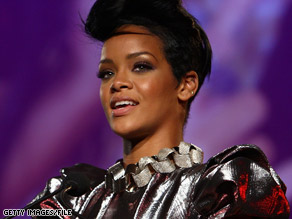 Rihanna's lawyer revealed that the singer will comply when prosecutors call her as a witness.

Schnegg also ruled Thursday that a leak of police photos showing Rihanna's bruised and bloodied face would not affect the prosecution of Brown.

Brown, 19, faces two felony counts of assault and making criminal threats stemming from an early morning incident on a Hollywood street in February.

After a short motions hearing Thursday, Rihanna's lawyer Donald Etra revealed that prosecutors told him they would call Rihanna -- whose full name is Robyn Rihanna Fenty -- as a witness at next month's hearing.

"She will definitely comply with the subpoena and any court order," Etra said.

While he would not disclose whether she still had contact with Brown, he said, "She's monitoring closely the progress of this case."

Rihanna's schedule has been cleared for the expected court date, he said.

It is unclear whether Brown and Rihanna are still in a relationship.

Brown's lawyer Mark Geragos was unsuccessful in his effort Thursday to get police records concerning their internal investigation of the leaking of the Rihanna photos.

The judge said she might change her mind before a trial, but -- for now -- those records are not relevant to the case against Brown.

Brown, who issued a public apology for the incident in February, recorded a short video posted on YouTube this week in which he said "I ain't a monster."

He entered "not guilty" pleas in an earlier court appearance.

If Brown is convicted on the two counts, he could be sentenced to anywhere from probation to four years and eight months in prison, the Los Angeles County District Attorney's Office has said.

The alleged attack happened in February during an argument that began when 21-year-old Rihanna, who had been dating Brown, found a text message from another woman on his cell phone, according to a sworn police statement.

All About Chris Brown • Rihanna • Hollywood