(CNN) -- Wayman Tisdale, who became a successful jazz musician after retiring from pro basketball, died Friday morning after a two-year battle with cancer, his agent said. 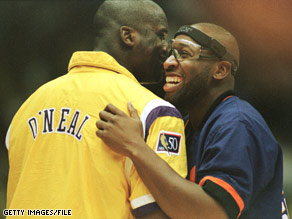 Tisdale, 44, died in a Tulsa, Oklahoma, hospital, where his wife took him when he had trouble breathing early Friday, agent Scott Pang said.

Tisdale's death was "a complete shock" and came as he prepared to return to the recording studio next week to work on a project with jazz guitarist Norman Brown, Pang said.

"He was a real testament to the power of positive thinking," Pang said. "Even after the cancer and amputating his leg above his knee, he never lost that smile on his face."

Doctors discovered Tisdale's bone cancer after he broke his leg in a fall down a flight of stairs, according to the official biography on his Web site.

"It really showed me what's important in life, man," he said in his bio. "It's not getting as many houses as I can, not driving the biggest cars. What's important is family and being healthy."

Tisdale averaged 15 points and six rebounds a game over a 12-year NBA career, during which he played with the Indiana Pacers, Sacramento Kings and Phoenix Suns, according to the NBA Web site.

"He was the nicest man in the world with the biggest heart and an even bigger smile," Reggie Miller, Tisdale's teammate with the Pacers in the late 1980s, said in a statement to the Indianapolis Star. "I thank him for befriending me and showing me there is more to life than just basketball."

"That's a real friend who's got your back and would do just about anything for you," Perkins said. "That smile just gets you. He was upbeat all the time."

Tisdale was also considered a Sooner superstar during his stint at Oklahoma University.

"Wayman's one of the biggest reasons why I chose Oklahoma," said Stacey King, Tisdale's Oklahoma teammate and a former Chicago Bulls player. "I wanted to be part of something special, and it made logical sense to go to OU, because I wanted to pattern my game after him. I wanted to be like him. People used to talk about 'Be like Mike [Jordan],' but I wanted to be like Wayman. We've lost a special person. I don't think there will ever be another Wayman Tisdale."

His jazz recording career began in 1995, two years before his 1997 NBA retirement, with a debut CD that rose to No. 4 on Billboard's Contemporary Jazz chart and crossed over onto the R&B charts, the bio said.

Subsequent songs -- including "Ain't No Stopping Us Now," "Can't Hide Love" and "Don't Take Your Love Away" -- were top radio hits.

Singer and actor Jamie Foxx praised the basketball star's music career, telling Rolling Stone magazine in 2005 that his all-time backup band would be "Sheila E on the drums; Herbie Hancock on the keys; Earth, Wind and Fire singing backup vocals; Prince and Slash on guitar; Randy Jackson on percussion; Wayman Tisdale on bass; Kenny G on the sax with Branford Marsalis; and Wynton Marsalis on trumpet."

Tisdale is survived by his wife, four children and one granddaughter.

All About NBA Basketball