LONDON, England (CNN) -- Move over Susan Boyle. A week after the Scottish woman became a global sensation following a barnstorming audition on "Britain's Got Talent," a 12-year-old Welsh boy with a Motown voice has been hailed for his "life-changing" performance on the TV show after earning a standing ovation from Simon Cowell. 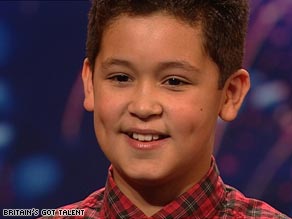 Jafargholi impressed the "Britain's Got Talent" judges with a rendition of "Who's Loving You."

Shaheen Jafargholi's prospects looked bleak when the infamously hard to impress Cowell brought the audition to an abrupt halt just one verse into his rendition of "Valerie," the Zutons' song covered by Amy Winehouse.

"You've got this really wrong," Cowell told him. "What do you sing apart from that?"

Jafargholi instead offered to perform "Who's Loving You," written by Smokey Robinson and performed by a young Michael Jackson with the Jackson Five, bringing screams of delight from the audience as he launched into a note-perfect rendition that brought a beaming Cowell and fellow judges Piers Morgan and Amanda Holden to their feet.

"This is how one song can change your life," Cowell told him. "This may be the start of something special for you young man."

Writing in his blog for the show, Morgan said Jafargholi had been the stand-out act of the show and tipped him as a possible challenger to Boyle for the TV talent show's £100,000 ($146,000) prize.

"Once Simon got him to sing the right kind of song for his voice, he was sensational. Like a young Stevie Wonder," Morgan said.

In an interview for the show, Jafargholi said he had been singing since he was two years old. "When I was a bit older my mum got me some singing lessons and my voice just got bigger and bigger," he said. "Hopefully this is going to be my big break."

Last week's performance by Boyle, the 47-year-old with a Broadway voice who claimed to have never been kissed, brought the show global attention, with her version of the Les Miserables' tune "I Dreamed a Dream" gaining more than 32 million hits on YouTube as well as earning her a string of U.S. media appearances, including on CNN's Larry King Live.

Jafargholi has some way to go to match Boyle's success. By Monday morning a YouTube link to his performance had been watched just 330,000 times. Who do you prefer? Susan Boyle or Shaheen Jafargholi? Sound Off below