Sponsor Jill Sobule's album, get a spot on it 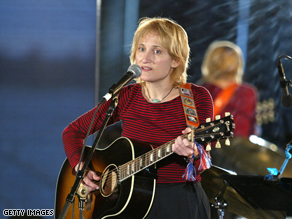 Jill Sobule raised $75,000 from fans through a Web site to fund her latest album.

Singer-songwriter Jill Sobule has both in spades.

Before Katy Perry topped the charts with her sassy single, "I Kissed a Girl," Sobule scored a Top 20 hit with a song of the same name back in 1995. Since then, she's been on four record labels and has seen some modest success -- mostly recently as a songwriter/composer for the Nickelodeon series, "Unfabulous."

These days, Sobule is a free agent. Translated, that means the 40-something entertainer must now think of creative ways to make ends meet and pay for her artistic endeavors.

In January 2008, she started her fundraising drive on jillsnextrecord.com. Visitors to the site were greeted by a message that read, "Hi, I'm Elaine, Jill's mother. As you know, my daughter is a real talent." During the next six weeks, donations flooded in via PayPal.

Watch Sobule surprised at the effectiveness of her pitch »

To sweeten the pot, Sobule offered prizes to contributors -- or "gifts," as she calls them. For 10 grand, you got to sing on the record. Five thousand dollars earned you a private living room concert. A $100 donation meant a T-shirt from Sobule with the words "Junior Executive Producer" emblazoned on it.

We interviewed the Denver, Colorado, native at her home in Los Angeles -- in the living room, and not out by the pool. "I don't want people to think I'm rich," she said, her blue eyes growing wide with horror.

While the $75,000 she raised was enough to record her new album, "California Years," it didn't include money for a makeup artist or hair stylist. Instead, we had Sobule come into the CNN bureau in Hollywood to use the glam squad we have on staff. Later, she blogged about sitting in Larry King's makeup chair.

The following is an edited version of the interview with Sobule.

CNN: So Jill, your next record that's coming out in April ("California Years") was funded entirely by fans. How did you come up with that idea?

Jill Sobule: Well, after being on two major labels that dropped me, and then two indie labels that went bankrupt, the thought of maybe getting another deal seemed ridiculous.

Originally, I thought I would try and have them invest -- just like stocks -- but I couldn't figure out how to do it. So the next thing was a different level of donations, and they would get gifts. For $10,000 [the "Weapons Grade Plutonium" level], you could sing a duet with me on my record, and someone actually did it from the UK.

CNN: Did you know this person?

Sobule: No, I didn't know her, but what was great was that she was not a singer professionally. She wanted to give, and I brought her over from the UK, and she was fantastic.

My first donation was from my friend Kenny and my mother, and really when I first started, I thought this could be a humiliating experience. Within six weeks, I reached the goal [of $75,000]. I was totally surprised and shocked. Some of my favorite things were, "I really don't like your music, but I like what you're doing, so here's five bucks."

CNN: Did you know a lot of the folks who donated?

Sobule: I don't have a Madonna-sized fan base, so I can actually e-mail and talk to everyone that e-mails me, because I am totally appreciative and I like my fans! They seem to have the same interests as me. They are kind of nerdy and cool -- and have good taste, obviously.

Someone asked me the other day, "Have you ever had a bad stalker experience?" And I said, "Well, I had two people, but I put them to work helping me sell T-shirts. Now I'm stalking them!"

CNN: Your plea for money on jillsnextrecord.com starts off with a little note from your mother saying, "Hi, I'm Elaine, Jill's mother. As you know, my daughter is a real talent."

Sobule: I thought it sounded too conceited -- in a seventh grade sort of way -- to try and tout myself. So I called my mother and asked her, "Will you write me a little letter?"

Sobule: For $1,000, Tom gets his own theme song that he can put on his answering machine. There are actually going to be two different versions. There is a spy version, that is kind of 007-like with horns, and then there is "That Girl," this Mary Tyler Moore '60s-type theme song. I am making myself do a lot of work, but it has been really fun.

CNN: For $5,000, donors got a private concert in their living room. How many of those did you have to do?

Sobule: About five or six. That is a good bargain, actually. If they have a large enough place, they invite a lot of people and charge 10 bucks to come in, so they get their money back. I always say that is the one you should choose.

Sobule: He coughed up a hundred bucks.

CNN: Have you gone through all the money?

Sobule: I have pretty much gone through all of it. I did not know how expensive it was to do all of this.

CNN: No wonder the record labels are broke. You could have done it for less than 75 grand if you did it in your home office on Pro Tools [computer-based recording equipment].

Sobule: Yeah. I could have done it for less than $75,000 -- and I probably will for my next one -- but I wanted to do it the old-fashioned way one last time, and do everything that the label does -- publicity, promotion, marketing, distribution, printing the old CDs. I guess that's what an indie budget would be at a label.

CNN: It's hard to make any money selling CDs these days.

Sobule: I have never made a cent off a record in my life. I have never recouped enough, and I never sold enough. When people see you have a song on MTV, they think you are doing well -- but you know, the way the traditional label deal was set up, it is really hard for an artist, unless they sold a lot, to see anything.

CNN: So what you're saying is that you're seeing your first dollar from record sales with this album?

Sobule: I will see my first dollar.

CNN: Because you're eliminating the record company as the middleman.

Sobule: Other artists -- I think this is completely a model for them to do. I think that it's very hard to be an artist more than ever, but it is also a very exciting time. It feels like the Wild West in a way..