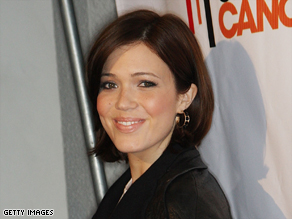 Mandy Moore first found recording success in 1999 with her single "Candy" and is now a well-known actress.

The wedding took place Tuesday, said Jillian Fowkes, who gave no further details about the nuptials.

Rumors first surfaced almost a year ago that Moore, 24, and Adams, 34, were dating, as paparazzi photos surfaced of the couple out together in Los Angeles, California.

Moore's first success as a recording artist came in 1999 with her debut album, "So Real," which went platinum with the help of her top-10 single "Candy."

Adams is known for producing rock music with a country influence. He is best known for his song "New York, New York", which appeared on his 2001 release "Gold."

Adams is also an author and has produced music for Jesse Malin and Willie Nelson. He recently announced that he was leaving his band, The Cardinals, because of inner ear troubles affecting his balance and hearing. Adams has fronted The Cardinals since 2004.

All About Mandy Moore • Ryan Adams • Pop and Rock Music