(CNN) -- After 34 years of invitations, the "Boss" finally said yes to the National Football League. 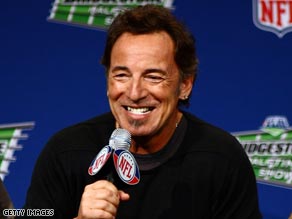 Bruce Springsteen was first asked to play the Super Bowl in 1975, his bandmate says.

E Street guitarist Nils Lofgren promises it will be "a very cool thing," but would only hint at what four Springsteen songs the band will play.

The song list, in fact, is subject to change "knowing Bruce, since what we do is so improvisational," he said

"We've got the best bandleader in the business and whatever we decide to do, we'll be able to do it well and I'm sure it will be a great ride," he said.

Lofgren said the NFL first asked Springsteen to play at the Super Bowl in 1975, but he declined.

"They keep offering it to him and he keeps turning them down," he said. "So, we were thrilled that he had a change of heart and decided to do it."

Springsteen is taking the E Street Band on tour a world tour beginning April 1 to support the band's latest album, which was released January 27.

The new album -- "Working on a Dream" -- sounds "very fresh and in your face," Lofgren said.

Singer-actress Jennifer Hudson will deliver the National Anthem before the start of Sunday's game, her first public performance since her mother, brother and nephew were found shot to death in October.

Faith Hill will sing "America the Beautiful" during the pregame show at Raymond James Stadium.

The 2009 Super Bowl will be broadcast February 1 in 230 countries and territories, the NFL said. More than 148 million American viewers watched the 2008 game, the NFL said.

All About Super Bowl • Bruce Springsteen