Hanging out with the wacky 'Flight of the Conchords'

NEW YORK (CNN) -- Even the most banal question is met with an amusing and thought-provoking response from Jemaine Clement and Bret McKenzie, the two quipsters behind "Flight of the Conchords." 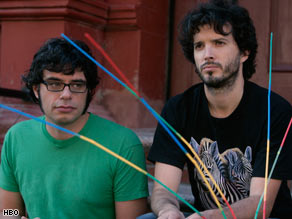 Jemaine Clement and Bret McKenzie are a struggling musical duo in "Flight of the Conchords."

No matter. Absurd comedy comes as easily to the duo as useless advice flows from Murray, their always-dressed-in-brown band manager (played by Rhys Darby) on their hit HBO program. Five minutes in an elevator, a hallway, or an interview room with Clement and McKenzie, and a scene worthy of inclusion on the show effortlessly unfolds.

Watch the group talk about the price of fame »

Of course the native New Zealanders possess more smarts than their on-screen personas, two scrappy, clueless musicians trying -- and failing miserably -- to break into the music business in New York City. But the resemblance is as clear as the giant, idolizing blue eyes of their lone fan, Mel (Kristen Schaal).

"Most of the stories are based on things that happened to us," says McKenzie. "We take one element, and then we kind of exaggerate it or twist it."

Consider the series' second episode of the new season (which started earlier this month), where Bret and Jemaine squabbled over Bret's "extravagant" purchase of a new coffee mug (it cost $2.79). Could a similar scenario have played out when the pair lived together as university students in their homeland more than 10 years ago?

"We were very poor," recalls Clement. "Sometimes in our flat we would have so little money that we were trying to think of schemes, like how can we make some money today so that we can have some dinner."

With the economy taking a turn for the worst in recent months, "Flight of the Conchords" now seems more relevant.

"We basically never set out to have the show be a credit crunch show," says co-executive producer and co-creator James Bobin. "But it seems the world has caught up with us."

And CNN caught up with Clement and McKenzie (Bobin, too) to talk about writing silly songs, the sweet tooth of success and to find out why Aussies -- such as CNN's interviewer -- are always in the cross hairs. The following is an edited version of the interview.

CNN: The show is a big hit around the world. Do you consider yourselves worthy cultural ambassadors for New Zealand?

Jemaine Clement: I think in some ways our characters are typical of New Zealanders. New Zealand has a reputation as being one of the most boring peoples of the world. You don't know of that?

CNN: I wouldn't agree with that.

Bret McKenzie: Friendly. I think they're famous for being friendly.

CNN: As an Australian, I would like to know why you make fun of Australians so much.

McKenzie: Because we find them funny.

Clement: We've toured in Australia and ... it always struck me when we went out to lunch with people how many times we would be made fun of because of our accents. So we stored up all that resentment and we waited years ...

McKenzie: And unleashed it.

Clement: We're giving it back to the Australians who made fun of us.

CNN: James, what is it like to work with these two?

James Bobin: It's a pleasure, obviously. We've been friends for years now. ... The show's incredibly hard work because obviously we do music and comedy at the same time and that's quite a challenge. But they're both very hardworking so it makes it easy.

CNN: What's it like on set? I imagine when the cameras start rolling that a lot of what happens is improvised.

Bobin: To a certain degree, yeah. We have a script that we like ... so we obviously try to nail that first. And from that position we just play with it a little bit and see where we go. Especially with Rhys, because Rhys is such a brilliant improviser and these guys and Rhys do so well together in those scenes in the band meetings. Often they go way off script.

Clement: Yeah, we try and write the script with parts that we know we can improvise off. So we leave some things open-ended.

McKenzie: It's between 17 and 18 percent improvised.

Clement: But this interview is a hundred percent.

CNN: A lot of the musical numbers from the first season you had in stock before you even made the TV show ...

CNN: That wasn't going to be my question! How challenging was it to come up with a whole new set of songs?

Clement: Well, I think that was the fun part of the show because playing music is fun.

Bobin: Also, we had some stories in mind so this time round we could write songs to fit with the stories -- which was kind of nice because last year it was a bit harder to squeeze the songs into a storyline. It just made for very strange situations.

CNN: How confident are you both in your abilities as musicians?

CNN: How are you enjoying the fame that's come from the success?

McKenzie: Oh it's lovely. You get free desserts.

McKenzie: Strangers talk to you.

Clement: But balanced against the free desserts, it evens out.

CNN: Have you encountered any Mel-like fans?

McKenzie: A lot of fans like to come up and say they're the real Mel. Or "you've actually got two fans."

CNN: Did you know someone who was like Murray? Is he based on a friend or a stereotype?

Clement: In some ways, our real manager in New Zealand.

Clement: She gives us lists that are overly detailed. And when we were going to a new country she'd be very worried for our safety. Not that long ago Tenacious D [Jack Black's band] came to New Zealand and we were asked to open for them, and she didn't know who they were, even though they're the biggest musical comedy act ever. And that carries through to Murray.

CNN: How surprised were you by the success of the show?

McKenzie: I'm surprised by the diversity of the fans. Like there are people who are our age, which makes sense, and then there are people in their 70s who love the show. And then there are children who love the show. There's a scene in the show where I watch television in a box. I get a box sent over from New Zealand. And my friend's son, he watches TV sitting in a box. And he's 9. It's great.

HBO, like CNN, is a unit of Time Warner.