(CNN) -- Todd Rundgren has it backward. 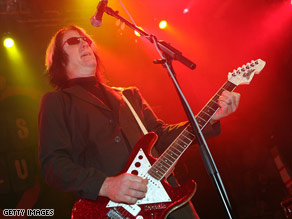 Todd Rundgren's new album was inspired by touring and his thoughts on militarism.

Not just his songwriting and recording methods, though those, too, are unorthodox. It's the whole music business-pop star arrangement, which is based on musicians determined to hit the Top 40 and then doing it again and again -- with occasional artistic detours -- that he's subverted.

He likes it that way. He describes the creation of his music as "very plastic," in the sense of flexible: He creates songs in the studio, piece by piece, and "it allows me to edit the stuff practically all the way up to the final mix process."

One can easily look at his career the same way, with the detours having been the point of the journey.

"It's unconventional, but if you have those tools available, it becomes the logical way to do things," he said of his creative process.

Rundgren's new album, "Arena" (Hi Fi), sounds like a throwback to his more song-friendly works, which was (mostly) deliberate, he says. The album's 13 power-chord rockers are a tip of the guitar to his recent touring with the New Cars (filling in for Ric Ocasek) and his subject matter, militarism and "what I saw as a loss of masculine integrity," he explained.

"The people who have been running the country are liars and cowards and hypocrites and perverts," he said. "And I wouldn't want all the rest of the men in the world to think that's how you succeed in life. Now that they are out of here, we have to ... reclaim what our traditional ideals were: You protect the weak, you bear up under the horrible burdens, and you seek the truth. ... You sacrifice for others."

Not exactly Top 40 material, but in Rundgren's career, it's the Top 40 hits that have been accidents.

He started his solo career in the early '70s with a handful of them -- "We Gotta Get You a Woman," "Hello, It's Me," "I Saw the Light" -- but quickly began devoting his time to album-length experiments, with occasional hit-single forays ("Can We Still Be Friends," his band Utopia's "Set Me Free").

Rundgren also became an in-demand producer, with results ranging from No. 1 singles (Grand Funk Railroad's "We're an American Band" and "The Loco-Motion") to classic albums (XTC's "Skylarking," Meat Loaf's "Bat Out of Hell"), no two of which sounded exactly alike.

He says his goal is to bring out the best in whomever he's working with, to make a record that's true to the artist's personality.

Ironically, for someone so steeped in technology, he's not a fan of using studio tricks -- AutoTune and the like, which remove all the rough edges from performances -- for the sake of creating something "perfect."

"Part of the problem is, there are two ways to make music. One is to be revelatory, and one is to be obfuscating," he said. "You create a different image of yourself for people instead of actually revealing something truly about yourself. And you can say the difference is the difference between Michael Jackson and Tom Waits, or something like that. ... The material Madonna writes is to a persona. The persona is what's being marketed, and the music is just part of the merchandise."

Rundgren himself composes from the inside out, putting technology at his disposal. (He's often been ahead of the tech curve, going back to the late '70s, when he created music videos and software programs and Utopia played on the interactive television service QUBE.) "I start with a rhythm idea and then add chords," he said, creating arrangements as he goes. Lyrics often come last.

"Most people have the song before the arrangement," he said. "I do it the other way around."

On "Arena," the songs -- which all have one-word titles ("I'm close to a haiku," Rundgren joked) -- include "Mad," in which Rundgren sings about being "at the end of my patience"; "Gun," which offers the warning, "You better run/'Cause I'm young, dumb and I've got a gun"; and "Today," which says, "Now it's time to break the chain."

The work is timelier than he could have imagined, he says.

"The irony of it is that the album was finished by June 1; then the s*** hit the fan three months later," he said, referring to the economic meltdown. "It's what I've been talking about. We've been indulging ourselves for a long time, and the record is about the kind of militance required to solve problems that tower so high we can't see the top of them."

For someone who writes such audience-friendly hooks, he's skeptical about much of today's pop music -- and its performers. The music may sound technically perfect, but it lacks soul and grit.

"That kind of approach is reinforced all the time by programs like 'American Idol,' where you have to look a certain way and smile a certain way and deliver the song a certain way," he said. "And if you're outside of that, you're going to get bumped. It just makes music all come out kind of the same.

"The thing that makes it different -- the thing that makes it interesting every once in a while -- is when someone comes along and you think that they're not simply using this as a marketing tool for themselves," he continued. "You see them, and obviously music is the thing that redeems them. ... That to me is what makes music exciting, is when suddenly you see someone and you realize they were meant for music."

And Rundgren? He's still meant for music, too. He's preparing to produce a new New York Dolls album, 36 years after he produced the group's debut. There's also talk he'll perform his 1973 album "A Wizard, A True Star" live. It's a full schedule doing something he loves, even if there's virtually no chance he'll be topping the charts.

"The record I made now is kind of a result of where I found myself at. I'm only going to be able to do this for a while longer; I'm 60 now. And regardless of how I behave when I'm on stage, I have the same issues that any 60-year-old does," he said, admitting to post-concert aches and pains.

He laughed. "I know I can't stop time, but there will be plenty of time to croon for people."