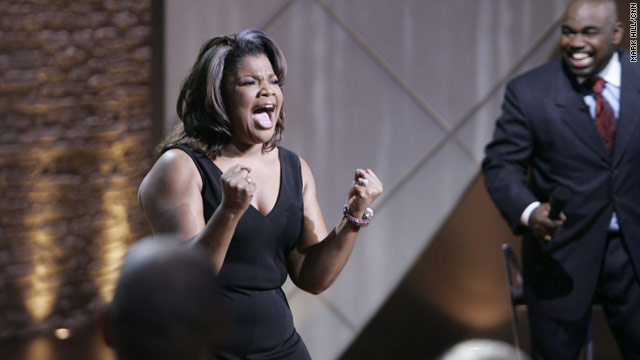 (CNN) -- In many ways, the critically acclaimed film "Precious" is about hopes and dreams.

When Mo'Nique, one of the movie's stars, was growing up in Baltimore, Maryland, she too longed for something.

"I've always wanted to be famous," the actress and comedian said. "I enjoyed watching famous people and so I wanted to be that. I just wasn't sure how I was going to do it."

"It wasn't until I saw this woman named Oprah Winfrey doing this show called 'People Are Talking' [a local talk show Winfrey co-hosted while she was at Baltimore's WJZ-TV] that I said 'That is what I want to do right there.' "

Mo'Nique has achieved that dream -- she's now hosting a late-night talk show on Black Entertainment Television -- and so much more.

With her portrayal of an abusive mother in "Precious," the singularly named entertainer is burning brightly in Hollywood these days.

She's been nominated for both a Golden Globe and a Screen Actors Guild Award for her film performance, singled out as one of People magazine's most intriguing persons of 2009 and won a Special Jury Prize for Acting at the Sundance Film Festival.

With all of the accolades and the many critics who have hailed her performance, it's only natural that people are excited about the possibility of an Academy Award nomination

Everyone it seems, except for Mo'Nique.

She talked to CNN about why she's taking it one day at a time, her influence as a plus-sized role model and why she's never met a curse word she didn't like.

CNN: It seems like people can't stop talking about you and awards, especially the big one, yet you seem decidedly low key about it. Why is that?

Mo'Nique: I'm very appreciative of it, but I can't let it drive me crazy.

It's a part of the process but I can't go crazy with it because I'm also a wife and a mother, a talk show host and a stand-up comic. God willing if it happens, it happens and if it doesn't, I understand.

CNN: Now that you are famous, is it all that you imagined?

Mo'Nique: Baby, when I tell you it is all that I thought it would be and then things I couldn't even imagine.

If I say what I have done in my career, you almost want to say "Girl stop lying!"

CNN: Years ago, you said your co-star on the television show "The Parkers," Dorien Wilson, expressed some concerns about your acting ability. Now with all of the praise you are getting as an actress, what do you have to say to that?

Mo'Nique: (Laughing) He did say that! He said, "She needs some work." I am going to have to remind him of that the next time I talk to him.

CNN: How have you worked on your craft as an actress?

Mo'Nique: Just experiencing and enjoying life. For me, I love to entertain, but I love being honest while entertaining.

When I played Nikki Parker on "The Parkers," I loved that woman and she was very honest. You just have to be right there in the moment.

CNN: What, if anything, did you love about the Mary Jones, the character of the mother in "Precious"?

Mo'Nique: What I loved about Mary is that she was open, she let you see it and she was vulnerable. And in the end she was crying out for help.

When you watch Mary throughout that film she was a monster until that very last scene. She became human. For as cruel as she was, she let you know that she was human and that she was sick.

CNN: You have been open about the sexual abuse you said you suffered as a child at the hands of a family member. Did those memories make it difficult to go there with this role?

When Mr. [Lee] Daniels [the film's director] called me for the role I was excited. I thought, "Oh good, this story is going to get told. It's not going to get swept under the rug anymore."

I knew Mary Jones, I knew that character. So when Mr. Daniels said "Action," I wanted to bring as much honesty as I could so people know that this is real. Like she really exists and it can be you.

That's why I say I don't focus on the awards because we have already won because this movie is changing lives.

I had an Asian brother come up to me after a screening in Los Angeles. We were all standing outside in the lobby and the way he was approaching had everyone a little uneasy.

He came over to me and he said "What I am about to say to you is going to sound a little weird, but I am Mary Jones. I was Mary Jones to my little brother and my sister."

We were embracing and he's crying and I said "Congratulations brother. Now go get yourself some help."

CNN: On a lighter note, your late-night talk show on BET doesn't even seem like you are working. It seems like you are out there playing.

Mo'Nique: Baby, I am having so much fun! We promised ourselves that it would be a party.

The way the world is right now, not just America, but the world, we feel like people want to feel good when they go to bed at night. They want to feel like tomorrow is going to be all right.

With the music, the dancing, the audience, the guests, I am having my own little party out there.

CNN: You look great doing it. How have you lost so much weight?

Mo'Nique: I made a commitment to working out, but it is very challenging to watch what I put in my mouth.

The main reason I did it was because of my children [4-year-old twins and a teenaged son]. I want to meet their children and so I have to show the universe I am willing to put in the work to be able to meet future generations if I am allowed.

CNN: You have been such an inspiration to plus-sized women. Do you worry about losing that demographic as you slim down?

Mo'Nique: I don't. Right now I fluctuate between 217 and 222 and I would like to get to an even 200. I don't worry about losing my fluffy sisters because I am excited about sharing the news.

I'm excited to say, "Listen, we are big women and we are going to be big women until we leave here, but let's be big, healthy, curvaceous women."

For me, when I was 262 pounds, just for me, I didn't want anybody cutting on me, sucking stuff out, stapling me or any of that.

CNN: Do you miss doing stand-up?

Mo'Nique: Please! I haven't stopped doing stand-up. They are trying to put the tour schedule together right now.

My husband, who is the executive producer for the talk show, says "You need that" and I get about six minutes of it with the show.

But sometimes I find myself wanting to go to the left on them and I have to hold back and say "Wait, I know someone from the FCC is watching."

CNN: Yeah, how do you tone that down for television because, based on your stand-up routines, you clearly like to cuss.

Mo'Nique: (Laughing) Cussing is great! It is beautiful. It's a stress reliever. It keeps your blood pressure down. Ain't nothing wrong with cussing.

I come from a family of cussers, baby. Listen, growing up, my aunts and uncles, you would go over their house to play spades and there would be some cussing going on and you'd have to say "I didn't even know you could put those words together!"

But the way my aunt did it, it was like she was singing to me. I would say to myself "God, when I get grown, watch out!"