Decision on Polanski extradition due early next year 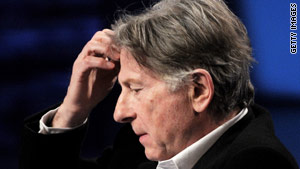 Roman Polanski was arrested in Switzerland on a U.S. arrest warrant stemming from a 1977 sex case.
STORY HIGHLIGHTS
RELATED TOPICS

(CNN) -- Swiss authorities will make a decision early next year on whether to agree to a U.S. extradition request for award-winning director Roman Polanski, a spokesman for the Federal Department of Justice and Police said Wednesday.

"It takes some time to prepare this decision, and that will happen at the beginning of next year," spokesman Falco Galli told CNN on Wednesday. "We will release information once we will have taken our decision."

Polanski, 76, is under house arrest at his chalet in the ski resort of Gstaad, Switzerland, while the Swiss decide on extradition.

The Oscar-winning director of "The Pianist" was arrested in Switzerland in September on a U.S. arrest warrant stemming from a case more than three decades old.

Polanski pleaded guilty in August 1977 to having unlawful sex with a 13-year-old girl five months earlier, when he was 43. Los Angeles, California, prosecutors dropped other charges in exchange for his guilty plea.

But Polanski fled the country before he was sentenced, after he learned that the judge might not go along with the short jail term he expected to receive in exchange for his plea.

Polanski remained free, mostly living in France, before his arrest in Switzerland. Los Angeles authorities said they sought his arrest when they learned that he would be traveling to Switzerland for a film festival in September.

Polanski still owed the money, plus $100,000 in interest, three years after the 1993 settlement, according to the documents.

The victim sought money for damages suffered when Polanski had sex with her. She said Polanski plied her with alcohol and quaaludes, a sedative hypnotic drug, during a photo shoot at the Hollywood Hills home of actor Jack Nicholson.

It's not clear whether Polanski completed paying the debt to the woman, although the court papers document efforts by her lawyers to garnish residuals and other payments owed to Polanski by the Screen Actors Guild, movie studios and other Hollywood businesses.

The victim came forward long ago and made her identity public, saying she was disturbed by how the criminal case had been handled.

Samantha Geimer, now 45 and a married mother of three, called in January for the case to be tossed out. Her attorney, Larry Silver, reiterated her position this month, saying details of the case harm her every time the story is in the news.

Polanski directed and wrote the screenplay for the 1968 horror movie "Rosemary's Baby," starring a young Mia Farrow. Before winning the Oscar for "The Pianist," he was nominated for best director twice before -- for 1974's "Chinatown," starring Nicholson, Faye Dunaway, and John Huston and 1979's "Tess."