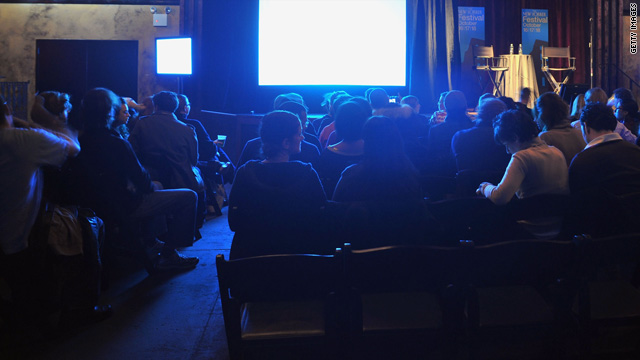 When it comes to whether or not a movie is good, the people's vote can matter more than the critic's.
STORY HIGHLIGHTS
RELATED TOPICS

(CNN) -- Early reviews called the movie "The Blind Side" obvious, idealistic, "curiously devoid of drama" and akin to a "two-hour holiday greeting card."

But moviegoers, who have made it No. 1 at the box office, don't care.

"I've been telling everyone on Facebook and Twitter, 'If you don't see anything this holiday, you need to see "The Blind Side," ' " said Danyelle Little, a 34-year-old mother of two from St. Louis, Missouri, who enjoyed the film so much she hopes to see it again.

"I was overwhelmed at how good Sandra Bullock was in this movie," Little said. "She was a character I never saw her play before."

Based on the life of Baltimore Ravens tackle Michael Oher, "The Blind Side" follows a white, devoutly Christian family in Memphis, Tennessee, as they take in a homeless young black man who eventually becomes a varsity football player with a scholarship-worthy GPA.

To some the feel-good film crosses the line into saccharine. Yet for the past few years, movies with mediocre reviews have often blown up at the box office -- to the point that studios are well aware it's not just professional critics they should pander to.

Just look at the jump "The Blind Side" has made from week to week despite those initial lukewarm reviews. That's the power of word-of-mouth in a digital age, said industry expert Anne Thompson of ThompsonOnHollywood.com.

iReporter: "Blind Side" is the "good side"

In the midst of social networks, blogs and the Web sites devoted to giving moviegoers a voice,"the Internet amplifies and speeds up the process of word-of-mouth," Thompson said,"[and] the studios are well aware of that."

As a result, said Chuck Tryon, an associate professor of film at Fayetteville State University in North Carolina and author of "Reinventing Cinema: Movies in the Age of Media Convergence," the production and distribution of films has been democratized.

"People want to be on the forefront of discovering a great new artist or a cool new film [and] there's more ease in sharing," Tryon said. "I mention my 'Blind Side' comment on Facebook and it circles well beyond my personal circle of friends in a matter of hours. There has been a long history of word of mouth, but the ease and speed of that has accelerated considerably."

It's the new reality in Hollywood, Thompson said.

"Look at the recent success of 'Zombieland,' 'District 9' or 'Paranormal Activity,' she said. "Why are those movies huge hits? They've got good word-of-mouth all over the Internet. People texting each other and tweeting about it is reducing the lag time between when a movie opens and how people find out if it's good or bad."

As Thompson points out, those viewer reviews can go both ways -- if a movie is truly bad, the critics can be once again drowned out by the sound of the moviegoer's disgust.

"The critics said Sacha Baron Cohen's 'Bruno' was OK -- maybe not as funny as 'Borat' but OK -- and the fans hated it," said Matt Atchity, Rotten Tomatoes editor-in-chief.

But that's exactly why Rotten Tomatoes, originally an online destination for only film reviews, started encouraging users to post their own critiques about six years ago. "We [thought we] might as well allow users to put their ratings up as well -- if only so we can see the difference."

Movies such as "The Princess and the Frog" and James Cameron's "Avatar" have even received knocks in advance of their release -- not from critics, but from potential film viewers.

"Some of the complaints [from non-professional critics]I've seen about 'Avatar' is that it looks like a video game, but I remember seeing a lot of bad predictions about 'Titanic' before that one came out," Atchity said.

"I had just started working on the Web and covering movies, and everybody and their mother was predicting that 'Titanic' was going to be the movie that just ruined James Cameron."

It doesn't take a movie buff to figure out that "Titanic" wasn't the ruin of anyone. In fact, it was the original word-of-mouth movie, staying No. 1 at the box office for an incredible 15 straight weeks.

That's also why experts agree that while word-of-mouth reactions have translated into box office dollars more than they did in the pre-blogging era, they're not completely overshadowing critical reviews.

On Rotten Tomatoes, critical reviews can add up to a barely "fresh" rating while user reviews will herald a movie as near perfect. That difference of opinion between the audience and the critics, Atchity said, often highlights how skewed user reviews can be.

"A film reviewer has to go see nearly every movie that comes out, whereas moviegoers are pretty good at picking out films that they think they're going to like. So the grade they give films is going to reflect that, because 80 to 90 percent of the time, they're right," he added.

That was the case with Little, who knew from watching the trailer that she wanted to see "The Blind Side." Her instincts were right -- by the time she walked out of the theater, she wanted others to feel the same uplift she had from viewing it. Judging by "Blind Side's" meteoric rise to the top, Little isn't the only one who felt that way.

"If we say to go see something, they're going to go."