'The Fourth Kind' of fake? 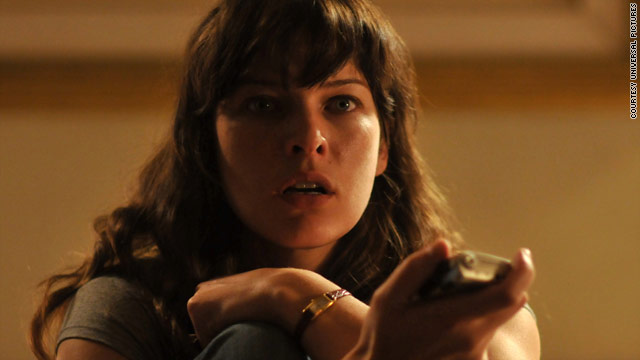 (CNN) -- "The Fourth Kind" isn't the kind that Nome, Alaska, wants around.

"People need to realize that this is a science fiction thriller," Michels said.

She said town residents have been getting a lot of phone calls lately, and frankly, they're a bit tired of talking about it.

"Some of the calls I'm just ignoring," Michels said, "because the issue we had to deal with in real life was very sensitive. The movie is portraying something like the 'Blair Witch Project,' and we're just hoping the message gets out that this is supposed to be for entertainment."

In real life, there was a string of disappearances in the small town on the west coast of Alaska, not far from the Bering Strait. In 2005, the FBI was brought in to investigate. The victims were largely native men traveling to the town from smaller villages, according to the Anchorage Daily News.

The FBI looked into about 20 cases, finding alcohol and frigid temperatures to be causes. Nine bodies were never found.

"The Fourth Kind," which comes out Friday, uses the disappearances as a jumping-off point for an alien abduction yarn, using "archived footage" to create an atmosphere of documentary realism. It's not a new idea; "The Blair Witch Project" pulled off the concept effectively, and the recent "Paranormal Activity" uses handheld cameras for a cinema verite look.

But unlike "Paranormal," "The Fourth Kind" literally announces its validity, taking Nome's documented unexplained disappearances and making the case for alien abductions.

The film does rely very heavily on the tagline "What do you believe?" letting viewers decide for themselves what's real and what's Hollywood, but it also conflates the two for its convenience.

For example, the title itself is derived from a "scale of measurement" that was "developed in 1972" to categorize alien encounters, best known through its use in Steven Spielberg's "Close Encounters of the Third Kind." (On the scale, the first kind of encounter is defined as a UFO sighting; the second, collected evidence of extraterrestrials; and the third kind is contact.)

However, Paul Halpern, a physics professor at the University of the Sciences in Philadelphia, Pennsylvania, who has studied the possibility of extraterrestrial life, doubts its validity.

"Honestly, I've only ever heard of it through fiction," he said, "not as an actual scientific scale of measurement."

The "fourth kind" is alien abduction, the hardest encounter to prove until now, said NBC Universal, parent company of distributor Universal Studios, in a press release. First time writer/director Olatunde Osunsanmi was unavailable for comment, but according to a fact sheet handed out at screenings, he discovered the disappearances that plagued Nome in 2004 when a friend told him of a Dr. Abigail Tyler.

During sleep studies "in fall 2000, the therapist's patients, under hypnosis, exhibited behaviors that suggested encounters with nonhumans," the statement read.

According to the press material, Tyler recorded footage depicting disturbing scenes, which director Osunsanmi uses alongside re-enactments starring Milla Jovovich and Will Patton in a split screen. To further push the reality bit, Jovovich informs the audience right up front that she "plays the role of Dr. Abigail Tyler," and that the images they are about to see are very disturbing.

"I think that it's fun to have fictional movies about the possibility of extraterrestrial life, but it's important for the public to understand the difference between science and science fiction," Halpern said. "Almost all scientists I know believe that there's no evidence of encounters between humans and alien life forms. Right now, astronomers are [still] trying to find evidence of very simple life forms in space."

Film reviewer Todd Gilchrist said he tried to watch the movie with an open mind.

"I was receptive to the possibility that it could be real, [and] I think that it was convincing enough to make it kind of scary-fun," the Cinematical.com reviewer said.

"Within five minutes of walking out of the movie and talking with my girlfriend and somebody else, the whole movie sort of logically falls apart in terms of authenticity," he said.

But, Gilchrist added, "it's not deceptive; it's what their marketing campaign is."

But why market fiction as truth in the first place?

Found footage and documentary-esque filmmaking changes the atmosphere of a film, Gilchrist said. Instead of walking into a trap a la "Saw," viewers get a "really creepy atmosphere even when nothing is going on." Recently, the latter has been more successful than the former, with "Paranormal Activity" topping the latest "Saw" at the box office.

"People want to see themselves as specifically connected or reflected in entertainment," he said. "Something like 'Paranormal Activity' or 'The Fourth Kind' sort of accesses that desire to be recognized or famous."

For example, by casting Jovovich the movie deliberately pretties up Tyler, which makes the found footage seem all the more true, Gilchrist said.

"The most authentic thing in the movie is how the real woman is much less attractive than Milla Jovovich, which automatically gives that woman's case some authenticity," Gilchrist said. "She's accessible in a normal, human way."

But whether it's real or not, is it scary? It all depends on what you believe, said film reviewer Brad Brevet.

"The audience has to ask themselves, 'Am I going to believe everything is real because Milla Jovovich told me it is?' Your answer to that question decides how effective the rest of the film is going to be," he said. "I was skeptical from the start but [also] questioning, which is one of the reasons I got a few chills."

In Nome, however, Michels wishes people would get a better grip on the difference between fiction and reality, not to mention geography.

"We watched the trailer on the Internet, and the first scenes are these majestic mountains with these trees, which is totally not Nome," she said, laughing. "We're pretty flat, right by the ocean."

According to IMDb.com, "The Fourth Kind" was filmed in Bulgaria.

"What they should've done," Michels said, still laughing, "is premiered here at the local theater."