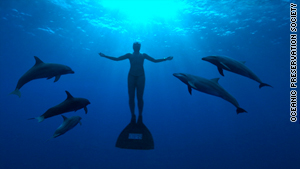 Filmmaker Louie Psihoyos exposes the dolphin-capture-and-slaughter industry in "The Cove."

London, England (CNN) -- "The Cove" is a controversial documentary about dolphin slaughter that reveals the distressing secrets behind the multi-billion dollar industry in captive dolphins.

It depicts the annual butchering of the sea creatures near the Japanese coastal town of Taiji, and has sparked an international campaign against dolphin hunting.

It won the audience award for best documentary at Sundance Film Festival in January, and recently, after much debate, was screened for Japanese audiences at Tokyo Film Festival.

The man behind the doc, is, American director Louie Psihoyos is an acclaimed nature photographer, but "The Cove" is his first foray into movies.

"It's the most powerful weapon in the world, I think. You drop a bomb and you kill people -- you drop a film and you change people's heads."

Psihoyos describes "The Cove" as a documentary that acts like a thriller, and many of the techniques he used whilst filming would not be out of place in that setting.

His team of free divers and activists used underwater cameras and hidden microphones to clandestinely film in the town of Taiji, where dolphin hunts have been carried out for centuries.

Their actions have made waves in Japan.

Police repeatedly questioned the secret filming of sections of film in the documentary, which shows fishermen making noise to drive dolphins into a hidden cove before killing them with spears.

Psihoyos risked arrest on trespassing charges from the making of the film when he traveled to Japan last week for the screening, according to the Associated Press.

Psihoyos grew up watching James Bond movies as well as Jacques Cousteau specials. He attributes the film's popularity to its pace and style.

"Most documentaries feel like you're taking your medicine or eating your vegetables, where you know it's good for you but you don't really want do it," he told CNN.

What do you think are the best activist movies? Tell us in the SoundOff below

Psihoyos said he took cues from master filmmaker Alfred Hitchcock to depict the violence of dolphin hunting without graphically showing the act.

He describes the film as the ultimate date movie, with enough action to provide an adrenaline rush, while also giving viewers something to talk about afterwards.

"This is a movie that will stay with you ... it will challenge a lot of your beliefs about a lot of issues," he said.

With this film I wanted to create a legion of activists, and it's working
--Louie Psihoyos, Director

The storytelling is anchored by Richard O'Barry, who trained the five dolphins used for TV's "Flipper" in the 1960s.

O'Barry's life changed after one of those dolphins died, and he's spent the last 40 years fighting to free dolphins from captivity.

Some of the dolphins captured at Taiji are sold to aquariums, parks and zoos, while the rest are killed for their meat. O'Barry says he's more upset with the trainers who aid the capture of marine life than with the hunters themselves.

"The captures are really the economic underpinning of the dolphin slaughter because they are getting as much as $146,000 for each live dolphin," he said. "They get only about $500 for a dead dolphin."

Upwards of 2,400 dolphins are captured or killed each year in the cove in Taiji, but more than 20,000 dolphins are killed in Japan annually, according to Psihoyos.

Killing dolphins is not prohibited by the International Whaling Commission's ban on commercial whaling. The Japanese government defends hunting cetaceans as part of regional traditions.

Japan's Fisheries Agency restricts the practice by handing out quotas to a few towns each year. This year, Taiji was allocated a quota of about 2,300 small cetaceans like dolphins, porpoises and whales, prefectural official Shimamura told the Associated Press.

Psihoyos, who is also co-founder of the Oceanic Preservation Society, said in a bid to save the dolphins he had to show how humans have tainted the ocean to the point where dolphins are no longer safe to eat.

In the documentary, he examines the health risks of eating dolphin meat, which he claims, often contains toxic levels of mercury.

"Everybody who sees this film has a different reaction to it. It's not just about harming dolphins," he told CNN. "The film is a microcosm of what's going on in the ocean."

A global outpouring of support for the film has also helped raise its profile. The documentary has spurred celebrities including Ben Stiller, Yoko Ono and Hayden Panettiere to call for an end to dolphin hunting.

And it isn't just Hollywood stars who are taking up the cause. Psihoyos said he receives e-mails every day from people around the world who want to help raise awareness.

He said: "With this film I wanted to create a legion of activists, and it's working!"