Review: 'Fame' should be called 'Anonymity' 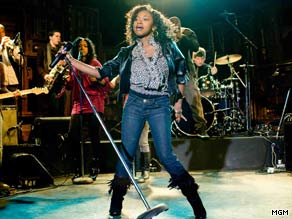 Naturi Naughton gets a showstopping number in the new version of "Fame."

Yes, "Fame" is back, nearly 30 years after Alan Parker's movie dragged the MGM musical kicking and screaming into the 1980s.

The 2009 edition retains the name and even the logo but sheepishly holds the naked ambition of the Academy Award-winning title track back until the end credits. Success comes in many forms, we're piously informed: in doing something that makes you want to leap out of bed in the morning, in finding friendship and love ... but not necessarily in, you know, money, adulation and immortality.

That may be true, but they didn't call the movie "Contentment."

Still, it's easy to imagine why someone figured the time was right for another term at New York's High School of the Performing Arts. Preteens have embraced Disney's "High School Musical" moppets, and our top-rated TV shows all seem to be variations on "American Idol."

"Fame" presents the same playbook: talent show auditions and party pieces, criticism and approbation, interspersed with just enough offstage information to give us a rooting interest in individual students' success and failure. But there's really nothing here that you can't see on the reality shows for free.

The original film's screenwriter, Christopher Gore, first conceived of "Fame" as a TV series -- it materialized in the wake of the film's success and ran for four seasons, 1982-86 -- and presumably that's the goal this time too.

Allison Burnett's screenplay follows Gore's template, beginning with a new round of candidates trying out for the school and then following them through four years of heavily truncated life lessons.

Director Kevin Tancharoen, a veteran of Britney Spears' Onyx Hotel tour, also reprises some of the more memorable vignettes from Parker's film -- a brush with the casting couch; a close call with a subway car -- invariably to lesser effect.

Substituting a PG rating for the original's R, the new movie has rounded off the rough and the raw, but all the handheld camera work in the world can't make it feel real.

There is talent here. The standouts are the singers: Naturi Naughton has a big voice and is plausibly cast as a potential star in the Alicia Keys mold. Asher Book has the smile of a teen idol and the pipes of James Blunt.

But if you're looking for personality, the faculty dominates with minimal expenditure of effort. The staff includes "Fame" alumni Debbie Allen as Principal Simms, Charles S. Dutton, Kelsey Grammer and Bebe Neuwirth. Sadly, the latter two -- TV's Frasier and Lilith -- aren't on screen together.

The young cast sing, they dance, and they act their socks off, but simple human interaction seems beyond most of them. It doesn't help that the dramatic scenes are so clichéd they might as well be acting exercises, but if there's a future De Niro here or a budding Streep, I must have blinked.

Then again, Parker's film bequeathed us Irene Cara and not much else to remember it by. Well, "ER's" Paul McCrane. (Meg Tilly was in the chorus.)

Composer Mark Isham has crafted some nice melodies and an eclectic score, but for the most part, the new "Fame" is all too anonymous.

All About Movies • New York City