Renee Zellweger: 'I sort of disappear a little bit'

NEW YORK (CNN) -- "My One and Only" begins with Renee Zellweger, playing a woman based on George Hamilton's mother Anne, discovering her husband with another woman. 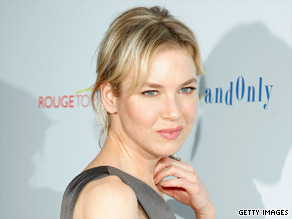 Renee Zellweger plays a woman based on George Hamilton's mother in "My One and Only."

Despite the initial heartbreak, Anne puts on a happy face, and Zellweger gives life to a character who's determined to make the rest of her years comfortable and adventurous.

Her husband's indiscretion is the catalyst that sends Anne on a cross-country quest to find a new husband in 1953 America. She pulls her two sons out of school in New York City and the trio set off on an adventure by car. The tale has its roots in actor George Hamilton's young life.

The film takes a look at gender roles of the time and how women were perceived. Much of the film gets colored in by the characters and their ever-present emotions (though Zellweger's fabulous frocks add plenty of color on their own).

Zellweger, who won an Oscar for "Cold Mountain," spoke with CNN about "My One And Only," George Hamilton and the way she believes she is perceived.

CNN: What do you think of George Hamilton as a person now, knowing what he went through in his youth?

Renee Zellweger: I think it's so fascinating. It was probably my favorite part of this experience, discovering that this was actually his life story. I mean, who knew?

You have an idea about who a person is based on their public persona and the work that they've done. He's a spectacular actor, and his collection of parts that he's played and work that he's done is unbelievable. ... But to get to know him, he's so interesting. He's so clever, and he's very kind. Very kind.

CNN: You're playing Hamilton's mother. Did he fill you in on what she was like?

Zellweger: No. You know, that's what's so interesting about it. [Despite] being such a personal ... project that he worked on so closely with Merv Griffin for over a decade ... he didn't. He had great faith and he just kind of let us go, which was sort of unbelievable when you look back on it.

It was really clear to me from what was on the page who she was.

Zellweger: Very much. She's kind of doing the best she can, and she thought, oh everything's kind of a lark ... and things work out without your having to put your hands on it and make it happen. But she learns a different way and a more satisfying way to be involved in her own life, which is wonderful.

So she sort of discovered that she could and gave herself permission to be in charge of herself. It was kind of a wonderful journey to watch.

CNN: She was judged on her looks many times in the film. Have you faced similar situations, being judged on your looks and people not taking you seriously?

Zellweger: Not in such an overt way. I'm not an actress who made her way based on physicality -- I think quite the opposite, in fact. I sort of disappear a little bit, with respect to my looks. I'm lucky. I'm not a standout, kind of knockout kind of girl that, you know, it's all about my great hair or something.

But, in subtle ways, maybe. I mean, people presume to know you for something and respond to you accordingly, I'm sure.

CNN: How was it stepping into the era of old Hollywood? Did you enjoy wearing the clothes from the early '50s?

Zellweger: I loved it. I loved it. I had such a great time with it, and I brought a lot of my own things, actually. Things that have been given to me, things that I just would find while I'm traveling on the road but have no opportunity to wear. You know, junk store finds that I think are spectacular. We brought them in, spruced them up and made them costumes. It was really exciting; it was fun.

CNN: Do you think you would have liked to work in that era?

Zellweger: Oh, yes and no. Yes because the glamour of it all or the -- it feels like play to me. It's like playing dress-up all the time. And no because of the responsibility of having to maintain that immaculate presentation all the time would be exhausting.

I think back on Marilyn Monroe putting those lashes on everyday, and I can't imagine, as I tie up my sneakers to go for a run. I cannot imagine that you're supposed to simultaneously look beautiful while you're going out to buy groceries. I just don't know that it would fit well with my personality. I don't know that I would succeed (laughs).

All About Renee Zellweger