Remembering 'The Diary of Anne Frank'

LOS ANGELES, California (CNN) -- Anne Frank's account of hiding from the Nazis in Amsterdam during World War II, published posthumously in English as "Anne Frank: The Diary of a Young Girl," has moved millions of readers across the decades. 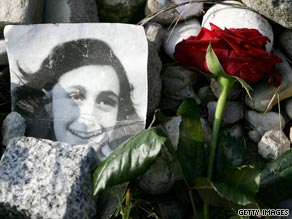 Anne Frank died almost 65 years ago, but the diary she left behind continues to captivate the world, says a rabbi.

This fall countless more American schoolchildren will be introduced to Frank's chronicle, and for many of them it will be their first exposure to the horrors of the Holocaust.

"As long as humankind exists this will be one of the most widely read and important books," Rabbi Marvin Hier, dean of the Simon Wiesenthal Center in Los Angeles, told CNN. "It captivates the world."

Hier calls the diary the most important document to come out of the Holocaust because for readers it made Nazi terror real.

"Here you have a teenager locked away, not even able to get a breath of fresh air, in that attic," Hier said. "That was her world, her daytime and her nighttime. She would end her life writing those notes that became the diary."

This year has seen a number of significant anniversaries associated with Anne Frank. Had she lived, she would have turned 80 years old in June. And August 4 marked the 65th anniversary of the family's arrest by German security agents.

This is also the 50th anniversary of the movie version of "The Diary of Anne Frank," which starred Millie Perkins in the title role.

"It's a great contribution," Hier says of the film. "It really personalizes her and it deepens the feelings and emotions" to see her portrayed on screen.

Twentieth Century Fox recently released a 50th-anniversary edition of the film on DVD and Blu-ray. In conjunction with that, CNN spoke with Perkins and her co-star, Diane Baker, who played Anne's older sister Margot.

Watch the stars reflect on the movie today »

This is an edited version of the interview.

CNN: How do you think the film holds up 50 years later?

Diane Baker: Millie and I saw it [recently] in L.A. and I hadn't seen it in years, but [director] George Stevens ... he made a masterpiece and 50 years later it's a classic.

CNN: Why do you think George Stevens selected you for the roles of Anne and Margot?

Baker: I think that for us, we weren't "actors." We had not done any [acting] work and so there was no chance that we would pull out any tricks, that we were innocent basically. ... He wanted the innocence for the young people in the film and none of us -- I certainly hadn't acted on anything. It was the first work I had ever done and Millie it's the same.

When we were being tested at Fox, [Anne's father] Otto Frank was on the set. ... He walked up to me and he looked at me and said, "You remind me so much of my daughter Margot." And that did it for me. I didn't know what was going to happen next, but the next thing I knew I was in the film.

Perkins: If Mr. Frank hadn't approved of us, George Stevens wouldn't have [cast us].

CNN: The movie was shot mostly on soundstages in Los Angeles.

CNN: A key scene involves a cat that makes noise in the attic while German soldiers are searching the factory below. How many cats did they use for that scene?

Baker: There were a hundred cats. The smell, the scent was incredible during those weeks. ...

It was so critical that that period, that day, the cat did the right thing. I mean if the cat hadn't gone under the sink, could you imagine the amount of film [you would need to shoot]? Today it's easier -- you can just keep the tape rolling. But we had 35 mm film we were using and the cats were having to do what George Stevens wanted them to do.

Perkins: And they did. They were wonderful. That scene is one of the most popular scenes in the movie. It's very tense.

Baker: The scene was [Steven] Spielberg's favorite scene in the film.

Perkins: That's right. He said that it was the most suspenseful [moment], more so than anything Alfred Hitchcock did, that scene, the cat scene. Yeah, I mean we're proud of it. What can I say?

CNN: How was the film received around the world?

Perkins: It was pandemonium. ... I remember hitting Paris and remember saying to [publicist Gertrude Brooks], "Gertrude, look at those people down there!" She said, "They are for you, dear." And I said, "Gertrude, I can't." And I remember I broke out in hives. ...

Cary Grant was sitting behind me on the plane and leaned over and gave me his St. Christopher medal and said, "You can hold this and when you get off the plane. Don't look in anyone's eyes, just look forward and just walk as if you're in a daze."

In Holland it was as if I was a Beatle. They practically knocked my car over and I had hordes of people chasing me and crowds pushing to get at me and it was because of "The Diary of Anne Frank." It was amazing.

CNN: What kind of reaction have you received from Holocaust survivors who have seen the film?

Baker: When I went to the Holocaust Museum in Los Angeles, there was a woman who came up to me and showed me her numbers on her arm, her stamps, and she said that she was in the camps and it was the last time [anyone saw] Anne and Margot in the camp. And she just held on to me. ... It was deeply emotional.

CNN: Do you think in another 50 years people will still watch this film?

Perkins: Oh, yes. It's in the museums. ... It's our history, people should know about our history and there it is.

Baker: And it's done with purity, I think, purity of style and a truth, an authenticity that I think will last.