(CNN) -- John Hughes, the producer, writer and director whose 1980s films such as "Sixteen Candles," "The Breakfast Club" and "Some Kind of Wonderful" offered a sharp-eyed look at teenagers and their social habits, has died, according to a statement from his representative. He was 59. 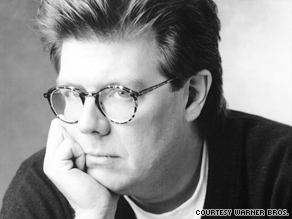 John Hughes was behind some of the most beloved films of the 1980s.

Hughes died of a heart attack while taking a morning walk in Manhattan, according to the statement.

Hughes, who was also a prolific screenwriter and producer, was at his peak in the 1980s, when his films -- which starred young actors such as Molly Ringwald, Judd Nelson, Anthony Michael Hall and Jon Cryer -- dominated the box office and were hailed by critics for their thoughtful teen protagonists, rarely portrayed with such sympathy in comedies at the time.

Ringwald, in particular, became a star, thanks to her performances as the lead in "Sixteen Candles," "Breakfast Club" and "Pretty in Pink."

"I was stunned and incredibly sad to hear about the death of John Hughes," Ringwald said. "He was and will always be such an important part of my life. He will be missed by me and by everyone that he has touched. My heart and all my thoughts are with his family now."

For a time during the decade, the writer and director was behind two or three films a year. Among his other credits were "National Lampoon's Vacation" (1983), "Ferris Bueller's Day Off" (1986), the Thanksgiving classic "Planes, Trains and Automobiles" (1987) and "Home Alone" (1990). Appreciation: Mourning John Hughes

"He was such a great writer who created so many enduring characters for film, both as a director and a writer. His real gift was in creating these identifiable characters," actor, writer and comedian Steve Martin, who starred in "Planes" with John Candy, told CNN.

Actress Ally Sheedy, one of the stars of "The Breakfast Club," said "I loved John Hughes. He was brilliant, he was lovely and he was kind. John handed me the chance of a lifetime and changed my world forever. What more can be said? I am eternally grateful to him and he is already terribly missed."

"I am truly shocked and saddened by the news about my old friend John Hughes," said actor Matthew Broderick, who starred in "Ferris Bueller's Day Off," in a statement. "He was a wonderful, very talented guy and my heart goes out to his family."

John Hughes was born February 18, 1950, in Michigan. He started his career as an advertising copywriter in Chicago -- the city was later the setting for many of his films -- and by the end of the 1970s was a frequent contributor to National Lampoon magazine. Blog: Seeing Chicago's North Shore through Hughes' eyes

His first screenwriting credit, according to the Internet Movie Database, was as a writer for the "Animal House" TV spinoff, "Delta House."

But Hughes quickly moved over to the big screen, writing 1982's "National Lampoon's Class Reunion," followed the next year by "National Lampoon's Vacation," based on a story he had written for the magazine. iReport: Which Hughes film was your favorite?

Though critical reception to Hughes' films could be mixed -- such works as "She's Having a Baby" (1988) and "Curly Sue" (1991) were slammed by reviewers -- Hughes had a knack for classic movie lines and images.

Such scenes as Anthony Michael Hall holding Ringwald's panties up high to the stunned appreciation of his friends in "Candles"; Steve Martin's harangue of a rent-a-car clerk in "Planes"; and Ben Stein's economics teacher asking, monotonously, "Bueller? ... Bueller?" in "Ferris Bueller's Day Off" have become pop culture touchstones.

Where are Hughes' teens now? »

Film critic Roger Ebert praised Hughes' empathy in a "Great Movies" appreciation of "Planes, Trains and Automobiles." "What can be said for [Hughes] is that he usually produces a real story about people he has clear ideas about," Ebert wrote, observing that "Planes" "is the only movie our family watches as a custom, most every Thanksgiving."

"The script for 'Planes, Trains, and Automobiles' was the best script I had ever read," Martin told CNN. "I asked John how long it took to write it, he said, 'I wrote it over the weekend.' The weekend. That shows you what he was able to do."

In recent years, Hughes had stepped back from the movie business to spend more time with his family, as well as "maintain a functioning farm in northern Illinois and support independent arts," the statement said.

Hughes is survived by his wife of 39 years, Nancy; two sons and four grandchildren.