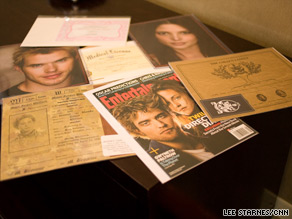 Their passion is the stuff of legends. If you throw a convention -- or if you're just selling T-shirts related to Stephenie Meyer's best-selling vampire novels, for that matter -- they will descend by the thousands.

"Twilight" lovers were such a force at last year's Comic-Con, Creation Entertainment, the franchise behind "Star Trek" conventions, immediately began putting together plans for fans of the goth-lite love story.

"We saw the reaction that it got, and that this was going to be something really huge; the fans are extremely passionate," said Creation Entertainment CEO Gary Berman.

See photos from the TwiTour »

Followers of the teen vampire romance also earned a reputation last year for claiming seats at Comic-Con -- the huge San Diego-based sci-fi, fantasy and comic book convention -- a day in advance and then not moving a muscle.

To avoid a repeat performance, this year Comic-Con changed its original Thursday schedule, holding off a panel for James Cameron's "Avatar" -- the long-awaited new film from the "Terminator" and "Titanic" director -- until after footage from the upcoming "Twilight" film, "New Moon," is revealed.

" 'Twilight' fans are very intense," said Lori Joffs, creator of the Stephenie Meyer-approved fan site TwilightLexicon.com. "[Comic-con] knew that 'Twilight' fans would sit there all day, and the fans of the ['Avatar'] series wouldn't get a seat."

But now that Robert Pattinson, better known as sexy vampire-in-charge Edward, is confirmed to be on the "New Moon" Q&A panel, who knows whether the screaming will die down in time for the next panel to start?

Something about the "Twilight" series causes a thirst that can't be quenched. Despite the fact that the next book in the saga is on hold and the next film, "New Moon," won't hit theaters until late November, fan conventions have been going strong all summer in cities across the nation.

And if you think it's just the tween crowd behind this, think again.

TwiTour, a weekend-long celebration, sounds like it would be reminiscent of a high school pep rally: raucous cheering with scads of teenage girls. But while there was plenty of screaming at the July 12 TwiTour in Atlanta, there were also plenty of women and a sprinkling of men who were unashamed that they were way beyond high school.

"It's the pure innocence of newfound love," explained 36-year-old fan Kimberly Hunt, who's not only read all four books, but also the 12 unfinished chapters of "Midnight Sun," a novel from the view of main vampire Edward's perspective, that are up on Stephenie Meyer's Web site. "Chivalry's dead, and you don't see it anymore. It takes you back to the days of your first love."

Hunt stopped in for the last day of the TwiTour convention sans husband and kids. Although Hunt explained to her husband that she would be spending her Sunday with "Twilight" -- which came with a $42 admission fee -- she neglected to mention that she would also be shelling out $40 for a photo with Kellan Lutz, the actor who plays Emmett Cullen. Hunt was so intent to get to meet Lutz she gladly joined the end of a line that easily held 400 others in front of her.

Compared with the younger fans, who can stroll into their age-appropriate section of a bookstore to find the series, adult "Twilight" fans occur by happenstance. But once it does, it's a domino effect: a co-worker, sister, kid's kindergarten teacher or friend will pass it on with urgent recommendations.

"I bought the first two books for my boss," said 38-year-old Kathy Campbell, "and she read them and said 'that's the best love story, you have to read them.' " After a bit of speculation, Campbell tried the books out for herself, and has now gotten her 29-year-old sister, Marie, addicted as well.

"Any 'Twilight' fan can tell you that they've been written so well, that they're real," said John Henson, a 33-year-old costume designer who collects original clothing from the film. "It was the second book, 'New Moon,' that made me a fan. It was chapter three, and it was the breakup of Bella and Edward; it hit me so hard emotionally that I had to cancel dinner with friends. At that point I was 29, 30 years old, and to make me cry? That's when I knew Stephenie Meyer was a brilliant writer."

For Joffs, the 35-year-old creator of TwilightLexicon.com, that ability translates into something she can feel passionate about even after a failed marriage.

"It saved me, because of the friends I made and the support that I've gotten. I get to go to these conventions, and it gives me something to keep going," she said. "You need something more than just kids, you need something for you."

The fans are fervent enough that "Twilight" conventions will likely go on for years, Joffs said.

"A woman picks up the book, expects it to be nothing much, kind of rolls her eyes, and then they get completely sucked in," she said. "It's something about that book, something about the way Stephenie Meyer wrote the books. I can't see it dying down anytime soon."