Zombies to show up at Comic-Con

(CNN) -- Hundreds of people attending Comic-Con in San Diego, California, will transform into zombies on Thursday. 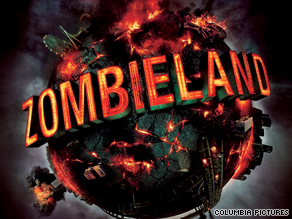 A "zombie walk" at Comic-Con will promote the upcoming "Zombieland" movie.

Comic-Con is an annual gathering of 125,000 people whose interests include comic book and science fiction film and TV, anime, toys and video games. Major movie studios and TV networks use the convention to launch their latest productions.

Zombie movies have been on the rise in recent years, and the type of zombies on the big screen has been evolving with the times.

George Romero's 1968 film "Night of the Living Dead" -- followed by "Dawn of the Dead" -- popularized zombies "based on the original Haitian voodoo kind of zombie, the supernatural being, the walking dead or the undead," said "Zombieland" director Ruben Fleischer.

Zombie films made "a seismic shift in zombies with Danny Boyle's film '28 Days Later,' where it became a more viral-based thing, a diseased population, as opposed to from the grave," Fleischer said.

In "Zombieland," living people are infected by a fast-spreading virus that turns them into "this other being" that is fast, ferocious and flesh-eating, he said.

"These modern zombies are reflective of some of the perils of what can happen with overpopulation and disease control and how quickly things can spread and become a problem." iReport.com: Going to Comic-Con?

Fleischer, along with screenwriters Rhett Reese and Paul Wernick, consulted a disease expert "to get to the bottom of what the modern pandemic would be," he said.

"When swine flu happened, it was after we finished shooting, but it just really reminded me of how these things can spread so quickly and a whole population can be devastated," he said.

While about 500 extras were hired to be zombies in Fleischer's movie, even more Comic-Con participants could take part in Thursday's zombie walk. Sony has hired professional makeup artists to get them ready.

Fleischer said those portraying a modern zombie should think like "a rabid dog."

Don't lumber along like Frankenstein's monster, but move with "a real furious anger and intensity" and "a lot of grunting and snarling and growling," he said. "Zombies don't talk."

Hunger is a modern zombie's chief motivation, he said: "I think that they're definitely cannibalistic. They want to eat people."

What does a modern zombie wear?

Fleischer's zombies come as they are, whether in a work uniform or dressed for the mall.

"It's as if you were at the mall and some zombies attacked and everyone there got turned into a zombie," he said. "They'd be wearing the same clothes that they had before. They'd be dressed in the same way."

Fleischer developed a list of 150 types of zombies for his film, including construction workers, moms, a punk rocker and preppie zombies.

"They're just people who got infected, like a modern pandemic," he said.

"Zombieland" -- which hits theaters October 9 -- brings out the humor in killing zombies, which is Harrelson's specialty.

"They're not easy to kill, so sometimes you've got to get them more than once," Fleischer said. "You've got to make sure you get them because they'll keep coming if you don't."

Harrelson blamed post-traumatic stress from filming for his scuffle with a TMZ photographer at an airport the day after shooting wrapped in Georgia in April.

"With my daughter at the airport I was startled by a paparazzo who I quite understandably mistook for a zombie," Harrelson said.

While Harrelson will be at Comic-Con to promote the movie, it was not known if he would be kept away from Thursday's zombie walk.