'Year One' polishes forbidden fruit in comedic poke at the Bible

NEW YORK (CNN) -- In the midst of the ongoing culture wars, can it be a good idea to put out a comedy about two Stone Age men who wander into the Bible? 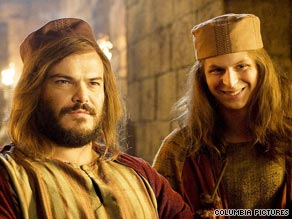 In "Year One," Jack Black stars as an inquisitive Stone Age man, with Michael Cera as his sidekick.

"Year One," which he directed, concerns two men -- played by Jack Black and Michael Cera -- who leave their home and, in their travels, meet biblical characters such as Cain, Abel, Abraham and Isaac. Among the locales: ancient Sodom, which "didn't seem worse than Las Vegas to me," Ramis told CNN.

"Year One" comes out Friday.

Ramis, whose writing and directing credits include "Groundhog Day" and "Analyze This," said it was time for a new biblical epic -- of sorts.

Ramis rounded up a cast of comedians familiar to any watcher of Judd Apatow-produced movies -- no surprise, since Apatow is a producer of "Year One." Christopher Mintz-Plasse ("Superbad"), Horatio Sanz ("Saturday Night Live," "Step Brothers") and Bill Hader ("Tropic Thunder") all have parts.

"A lot of them were new to me," said Ramis. "[But] Jack knew them, Michael knew them, they were connected -- all connected through Judd Apatow, through 'Saturday Night Live' ... the comedy world is a club."

Black joked that everyone's a member of a secret society, requiring retinal scans, that meets "inside the O of the Hollywood sign -- the first O," he noted..

"All the projects are laid out on a table," he said. "And we talk generally about how we're gonna take over the planet, take over the comedy and keep a vise grip on it."

Black said he revels in the chance to find the humor in the Bible.

"That was the fun of this thing," he said. "It's like, we are going to have some fun with the Bible; you don't see it very often. It hasn't really been done since Monty Python days. 'Life of Brian.' "

However, the film could get more than it asked for. Films poking fun at the Bible -- or, indeed, treating the Bible with anything less than reverence -- have been the subject of protests and criticism.

"Life of Brian," the Python troupe's 1979 comedy about an assumed messiah that parodied the story of Jesus, was protested by clergy in the U.S. and banned outright in Ireland. French protesters threw Molotov cocktails into a Paris theater showing "The Last Temptation of Christ," Martin Scorsese's 1988 film version of Nikos Kazantzakis' novel.

More recently, Mel Gibson's "The Passion of the Christ," though a huge financial success, was criticized by some observers for alleged anti-Semitism, as well as its violence.

Ramis, who observed that a number of biblical films focus on the New Testament, said he deliberately chose to make the Old Testament his subject.

"I told people that I wanted to do for the Old Testament what Monty Python did for the Gospels," he said. "Which is just to kind of take a funny look and project a contemporary sensibility back to these treasured myths of Western civilization.

"It wasn't so much to attack any particular religion," he added. "I figure all religions are good. They all make sense on paper; it's just the exploitation of religion that's been a problem, by ... people using religion to justify war, or to justify government or, you know, 'God made me do it.' "

Ramis said one of his intentions with "Year One," which he co-wrote with "Office" writers Gene Stupnitsky and Lee Eisenberg, was to focus on people, not God. Paraphrasing the liberal clergyman and activist William Sloane Coffin, he said, God's not the event itself, but "God's in our reaction to the event."

"I wanted to do a film that kind of addressed these fundamental beliefs and urged people to take personal responsibility, no matter what they believe God is or isn't," Ramis said. "It's still up to us in the final analysis."

Which is not to say that the film skimps on its comedy -- and with Ramis, Black, Cera, Hank Azaria, David Cross and producer Judd Apatow ("The 40-Year-Old Virgin," "Superbad") around, there's no shortage of jokes.

"We weren't locked to anything," Cera said. "It was a very honest set. If something wasn't working then we would address it."

"We got a lot of different options [from observers], and they were able to play with different options in the editing room. I thought it was a cool way to do it," said Black. "I've never done a movie like that -- and now I wanna do that on all my movies." iReport.com: Seen "Year One"? Share your review

The handful of early reviews have been positive, and Ramis is pleased with the result. He's particularly happy the film was received warmly in the Sodom shooting location -- Sibley, located in northwest Louisiana, in the heart of the Bible Belt.

"It's funny, because Southern people living in the heart of the Bible belt, there's a Baptist church every 150 feet in that area, and here we are in Sodom, in the city of Sodom," he said. "And they just got into it, they enjoyed it so much."