Review: 'Up' leaves you on a high 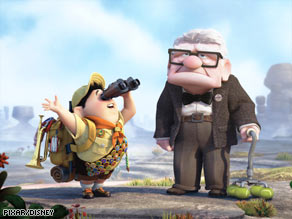 In "Up," a curmudgeonly senior citizen, Carl, tries to cope with the enthusiasm of Russell, a young boy.

Not that there's anything wrong with an animated film tugging at our tear ducts. But you can sense unease rippling through the younger halves of the family audience when, about five minutes into a spunky prologue, intrepid pre-pubescents Carl and Ellie abruptly morph into newlyweds, and then not-so-newlyweds.

They gray and stoop before our eyes, youthful dreams of exploration traded in for the comforts of home and domestic bliss. Ellie wants a baby but can't have one. Their savings for the holiday of a lifetime are eaten up by this rainy day, that domestic disaster, until there's no more lifetime left -- not for Ellie, anyway.

That leaves us with Carl, a grumpy homebody voiced by Ed Asner, who makes WALL-E look like a chatterbox. And he's one of the main characters.

No, I didn't hear anyone demanding when the dancing penguins were going to show up, but I'll wager someone was thinking it.

Such misgivings are ill-founded. As far as razzmatazz goes, "Up" delivers the goods. Not penguins, precisely, but more than the airborne house promised by the commercials.

There's a mythical multicolored bird, which may or may not be a snipe, but which answers to the name of Kevin and exhibits a sweet taste for candy bars. There are zeppelins and old-time explorers and talking dogs -- a whole pack of dogs, in fact. Dogs that serve wine and play cards and fly biplanes.

And there's Russell, a chubby Boy Scout -- or "Wilderness Explorer" -- who turns up on Carl's doorstep when he least expects it. After all, Carl wants to be free, and to get there, he launches his house into the sky thanks to thousands of balloons. How was he to know Russell was around?

"Up" doesn't always fly high. The dogs' canine high jinks are closer to "Beverly Hills Chihuahua" than we'd expect from Pixar, which tends not to play so fast and loose with the laws of nature for the sake of a few cheap laughs.

But if the muttering mutts keep the kids happy, well and good. The movie is on surer ground teasing out the relationship between Carl and Russell, floating well above the Earth.

Russell is all wide-eyed innocence and boundless enthusiasm, haplessly helpful. He's the mirror image of the child Carl used to be, if only the old man were capable of recognizing it.

But instead of looking around him, Carl is focused on landing that prize home of his in the prime location he mistakes for his ultimate destination (the lost world of Paradise Falls). The image of Carl valiantly dragging his house through jungle and over mountains will strike a chord with anyone holding down a mortgage. iReport.com: Share your review of "Up"

Written by Bob Petersen and directed by Petersen and Pete Docter -- both Pixar veterans -- "Up" mixes allegory with adventure and dumb imaginative exuberance. The balance isn't quite as tight as in Pixar's best movies, but the lightness is appealing, and Russell (voiced by Jordan Nagai) is an irresistible character. He's already carrying his own emotional baggage at 8 years old, but he's all heart, the kind to give kids a good name.

Screening in 3-D where possible, "Up" doesn't go overboard on stereoscopic gimmickry, but does exploit depth of field in a string of exhilarating cliffhangers and dogfights.

Funny and poignant and full of life, "Up" easily qualifies as one of the best movies of the year so far. Go with someone you care about.

"Up" is rated PG and runs 96 minutes. For Entertainment Weekly's review, click here.

All About Pixar Animation Studios • Movies • Cartoons and Animation