LOS ANGELES, California (CNN) -- DreamWorks Studios will back out of plans to produce a movie about the Rev. Martin Luther King Jr. unless King's three surviving children settle their differences over the deal, the studio said Wednesday. 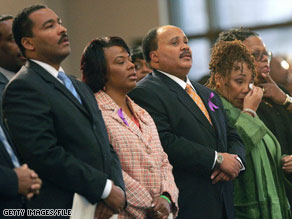 A longtime friend of the three Kings predicted peace may be at hand for the squabbling siblings and that all of them want Steven Spielberg's studio to portray their father's life on the big screen.

The latest public rift between Dexter King, the chief executive of the King estate, and his brother and sister -- Martin Luther King III and Bernice King -- erupted Tuesday after it was made public that Dexter King, 48, had finalized the deal with DreamWorks.

Martin King, 51, and Bernice King, 46, learned that a deal had been struck when Dexter sent them an e-mail Tuesday morning, just as the news media was being told by the studio, a source close to the family told CNN.

Yolanda King, the eldest of the Kings' four children, died two years ago at age 51.

Martin King and Bernice King, who live in Atlanta, Georgia, had known that Dexter King, who lives in California, was negotiating with Spielberg on a possible movie deal, the source said.

Bernice King and Martin King said they knew nothing about the DreamWorks project. They said they embraced the idea of a film about their father but told CNN's "Larry King Live" they were concerned about the deal.

DreamWorks issued a statement Wednesday that suggested King family unity was essential for the movie to be made.

"The purpose of making a movie about the life of Dr. Martin Luther King Jr. is to tell a great story which could bridge distances and bring people together," the statement said. "We remain committed to pursuing a film chronicling Martin Luther King's life provided that there is unity in the family so we can make a film about unity in our nation."

DreamWorks executives appeared caught by surprise by the King family's infighting, although such squabbles are not new -- Martin King and Bernice King filed a lawsuit against Dexter King last year over publication of their mother's recently discovered love letters.

Martin King and Bernice King have complained in court filings that Dexter King has acted independently for years on estate business matters, refusing to call a family meeting.

Over the past year, angered over Dexter King's move to publish their mother's love letters, neither Martin King nor Bernice King has spoken to Dexter King, the source close to the family said.

Dexter King, in a written statement Wednesday evening, said he has "always upheld my duty" as CEO of the King estate to communicate with the others.

"Although my communication with family members has been somewhat stymied by the current litigation, I have continued to reach out and I remain committed to working together with my siblings on projects to educate people about the life, leadership and teachings of our father, Martin Luther King Jr.," Dexter King said.

DreamWorks is "a company with unrivaled resources for making epic films of the highest quality, offers an unprecedented opportunity for educating the largest possible audience about our father's legacy as the leader of America's greatest nonviolent movement," he said.

"Just as Sir Richard Attenborough's film, 'Gandhi,' educated many millions of people all over the world about the Mahatma's teachings, I believe this project can do the same regarding the life, work and teachings of Martin Luther King Jr., and I sincerely hope my brother and sister will join us in supporting this urgently needed project," Dexter King said.

Tom Houck, an Atlanta public relations agent who has known all three children since the 1960s, when he was their father's driver, suggested the dispute could be resolved.

"I don't think that either Martin or Bernice are opposed to having a megafilm done on the big screen by DreamWorks, but I think it's the mechanism and the way it was done that's got them upset," Houck said.

"They're feeling that, until they resolve some problems with Dexter, that they're not going to be very forthcoming in letting this project go forward," he said.

Houck suggested someone such as the Rev. Andrew Young, a close aide to the patriarch during the civil-rights movement, might be able to help the siblings reconcile. Young is a former Atlanta mayor and former U.N. ambassador.

"Martin and Bernice want to have some reconciliation with Dexter before they sign off on it," Houck said.