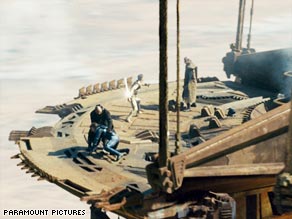 Kirk (foreground) and Sulu (center) take on Romulans on a planetary drill in "Star Trek."

He had to figure out a way to include action that would please a modern audience and utilize current movie-making techniques -- while still having everything ring true with characters that fans know extremely well. He answers this call throughout his film.

Perhaps the best example is in a powerful scene called "Space Jump, " in which his actors must sky dive from space into the atmosphere of Vulcan, a planet in danger of being destroyed by vengeful Romulans. They're attempting to land on the platform of a drill boring deep into the planet.

With the help of Chris Pine, who portrays a young Capt. James T. Kirk, and John Cho, who plays Hikaru Sulu, Abrams explains just how they did it.

Watch the actors make their dive »

J.J. Abrams: The sequence in the middle of the movie, the kind of centerpiece of it is this space jump.

Chris Pine: What's unbelievable about that -- and I'm not a big effects guy -- it didn't kind of blow me away as much until I watched the movie.

John Cho: It was fun and challenging. It was challenging in the sense that I haven't done action yet in my career, so this was completely new turf for me.

Abrams: We had this gimmick of this tether that's holding this drill between this ship that's in orbit and this drill that's above the planet. I'd never seen people sky diving passing something!

Pine: It's amazing to see what ILM [special effects wizards Industrial Light and Magic] was able to do. It was just incredible!

Cho: You know, that was me and Chris on wires in the tight suits and hanging up in the air at Paramount Studios.

Abrams: That whole sequence, which was obviously was one of the big, month-long shoots, that was one of my favorite sequences of the movie.