I went through hell to play 'Soloist,' says Foxx

LOS ANGELES, California (CNN) -- Jamie Foxx suffered through his own psychological turmoil while plunging into the role of a mentally ill musician in "The Soloist," the actor said. 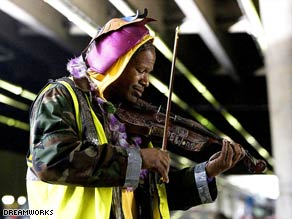 Foxx, 41, revealed that his bond with Nathaniel Ayers was close because of his own yearlong battle two decades ago -- triggered when "somebody slipped me something in college and I lost my mind."

"The Soloist," based on a true story, tells how Los Angeles Times columnist Steve Lopez, played by Robert Downey Jr., discovered the homeless Ayers and helped the former music prodigy, who has schizophrenia. The movie comes out Friday.

Foxx, who won an Oscar in 2005 for his portrayal of music legend Ray Charles, said he consulted a psychiatrist because he feared what would happen as he took on Ayers' personality.

The doctor warned him he could experience post-traumatic stress, Foxx said.

The Los Angeles Times reported that Foxx suffered "panic attacks and bouts of paranoia" during filming.

Foxx told of one early morning incident when he got so far into Ayers' character that he called his manager and said, "I know why Nathaniel does this and I'm him!"

"I explained what I was feeling to him and he said 'Foxx, you're not Nathaniel,' " he said.

Foxx said he had "a childhood fear of going crazy."

"There was a sanitarium in my hometown in Terrell, Texas, called the Terrell State Hospital, and when we would visit I would go, 'I hope that never happens to me,' " he said.

He left Texas after high school to attend college on a music scholarship in San Diego, California.

"When I was 18, somebody slipped me something in college and I lost my mind and they had to take me to the hospital," Foxx said. "For 11 months it was tough."

Another student served as his "angel," just as Lopez helped Ayers, Foxx said.

Just as Ayers used a cello for comfort, Foxx would use the piano.

"I would play my music to sort of like soothe it," Foxx said.

His "bad trip" subsided after almost a year, but Foxx said he drew on the experience to understand Ayers.

Ayers still lives in Los Angeles and is working part-time as a janitor.

The exposure to people who lived on the streets of Los Angeles taught Foxx a positive lesson, he said.

"We had a ball with them," he said. "They love to dance, they love to talk trash. ... They actually had a life. People were smiling and enjoying their lives."

The Oscar buzz is again building for Foxx, who is firmly established as master of the biopic.

He said he and his management have "carved out our own niche."

"They found this beautiful story, which paralleled my life a little bit," he said.

Foxx said he's "got his fingers crossed" that he will be able to someday bring the character of former heavyweight boxing champ Mike Tyson to the big screen.

"I think there's a beautiful story in it, not like Ali," he said.

"Ali was a story of yesterday when our heroes were heroes," he said. "This is a different type of hero story. It's a story of today. It's tragedy. It's a triumph. It's all of it put together."