(CNN) -- The box office fright flick "The Haunting in Connecticut" earned $23 million and a second-place ranking the first weekend of its release, satiating the moviegoer appetite for psychological thrills. 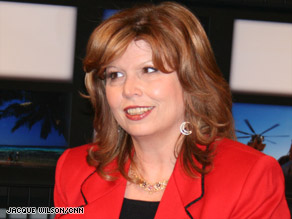 Carmen Reed's family lived in a former funeral home. Their stories inspired "The Haunting in Connecticut."

But what is entertainment for many was reportedly true life for Carmen Reed, who insists on using her maiden name to protect her children and grandchildren.

Reed, her husband and four children rented an old colonial home in Southington, Connecticut, in the mid-1980s in order to be close to a hospital where her 13-year-old son was receiving cancer treatment. Soon after, two nieces also joined them in the house that they learned had once been a funeral home.

It wasn't long before that son began telling stories about noises he'd heard and visions he'd seen, including the one of the "tall, thin man with long jet-black hair" whom the boy said he saw every night, Reed said.

"I was the biggest skeptic of all," she explained. "I put my son in a mental hospital because I didn't believe him."

Watch Reed talk about life in a haunted house »

Reed sat down with CNN to talk about the spooky stories that later became her own and how what her family experienced inspired a blockbuster film.

CNN: Tell me more about sending your son to a mental institution, where he arrived in a straitjacket and where you say he stayed for 45 days. Why did you do this, and what happened next?

Carmen Reed: At first I thought it was his cancer treatment. ... I took him to a psychologist, but he got darker and darker. And this one time, he got so bad, he attacked my niece. ... An ambulance came and took him to a mental hospital. ... He was saying, "Mom, don't leave me! It's going to come after you now." And it did.

CNN: You mentioned seeing a hand that grasped your niece and that mop water would turn a deep, dark red. What are some other things you saw or heard?

Reed: Mattresses would breathe. They had a pulse. ... There was the normal banging on walls, but it always came in threes. ... There was a deep, gravelly voice.

CNN: And yet you stayed for two years! If what you were experiencing didn't drive you to move away, what did?

Reed: I couldn't go to the grocery store without people telling me their ghost stories. I was usually there for three hours.

CNN: You talk about how you read from the Bible in an attempt to drive away demons. How did your experiences in this home influence your faith?

Reed: I've learned that most people just believe in this physical world. Some people question if there is a God or angels or demons. I don't need to question that. I found that answer in this house.

CNN: Are you still haunted by your experiences in that home?

Reed: I do dream about it, and I remember things, but one of the biggest mottos I have is "Be not afraid." When people are afraid to go somewhere, I'll go into the deepest, darkest part of it because I know I'm not alone.

CNN: You've consulted on this new film and are writing a book about your story. Why do you insist on using your maiden name?

Reed: To protect my children. ... My daughter was more scarred by the publicity than she was by the house. And I have 11 grandchildren, and I want to protect them.

CNN: What lesson do you hope people will take away from the film and the increased exposure to what you experienced in that Connecticut home?

Reed: Leave the occult alone. You think you can control it, but it's going to backfire on you.

All About Parapsychology and the Paranormal