LOS ANGELES, California (CNN) -- A hearing is set for Monday in a case involving actress Lindsay Lohan after an arrest warrant was issued for her Friday, officials said. 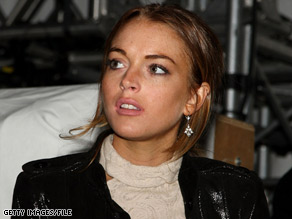 Lohan's attorney told CNN the warrant was issued "out of a misunderstanding." It was not known whether she would attend the hearing Monday.

The warrant was issued by a Los Angeles Superior Court judge in Beverly Hills, California. It apparently stems from Lohan's 2007 convictions for drunken driving, police said Friday. She is serving three years probation.

Sandi Gibbons of the Los Angeles County District Attorney's office told CNN on Sunday the warrant is believed to be in connection with a possible probation violation. The district attorney's office prosecuted the original 2007 case, she said.

Lohan "has the right to appear" at the hearing, said Alan Parachini, Los Angeles Superior Court spokesman. "That decision is up to her."

Lohan's attorney, Shawn Chapman Holley, told CNN on Sunday that she will appear at the hearing on Lohan's behalf.

"Since her case was resolved, Ms. Lohan has been in compliance with all the terms and conditions of her probation and all orders of the court," Holley said in a statement.

"The warrant issued on Friday was, in our view, born out of a misunderstanding which I am confident I can clear up next week," Holley said.

Police said Saturday they were not actively seeking Lohan, as they would not usually go after a person to take them into custody in such cases. Beverly Hills police Sgt. Mike Foxen said on Friday authorities were hoping Lohan would turn herself in.

Lohan was arrested twice in 2007 on driving under the influence charges, with a cocaine possession charge in the second incident.

The first arrest, in May 2007, came after Lohan lost control of her Mercedes-Benz convertible and struck a curb in Beverly Hills.

Just two weeks after checking out of a Malibu drug and alcohol rehab facility, she was arrested again in July 2007 after a woman called Santa Monica police saying Lohan was trying to run her down in a car.

A judge sentenced Lohan to three years probation after she entered guilty and no contest pleas to the charges.

Lohan's acting career, which started at age 10 on a soap opera, took off on the big screen a year later when she played both identical twins in Disney's "The Parent Trap."

Her pop music recording career, boosted by her movie roles, has floundered in the past year. Her last album was released in 2005.