(CNN) -- Doctors advised Robin Williams to take a week off from the 80-city tour of his one-man comedy show after the comedian experienced shortness of breath, according to his publicist. 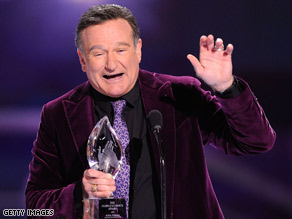 Robin Williams, currently on tour with a one-man show, is taking a break after suffering shortness of breath.

Performances set for this week in three Florida cities -- Hollywood, Orlando and Tampa -- will be put off until later, the publicist said in a statement on Williams' Web site.

"Williams was experiencing shortness of breath and is currently being evaluated by doctors who are recommending a week of rest," the statement said.

Williams, 57, will return to the stage with his "Weapons of Self-Destruction" show in Jacksonville, Florida, next Wednesday night, it said.

On the road since last September performing sold-out shows, Williams has covered 11 cities in the past three weeks.

This isn't the first time the actor and comedian has coped with health problems. In August 2006, Williams checked himself into an alcohol rehab center.